Chief Zuma Tlatoani was a suspect in the murder investigations of archaeologist Burt Montana in Temple of Doom (Case #40 of Pacific Bay) and scientist Bruce Green in The Seeds of Death (Case #41 of Pacific Bay).

Zuma is a 41-year-old chief of an ancient Aztec tribe who had been residing in Pacific Bay since ancient times. He has black eyes and is seen wearing Aztec garments with an Aztec headdress. Zuma is also seen wearing red tribal facepaint over his eyes.

In his first appearance, it is known that Zuma eats red chili peppers and knows Aztec.

In his second appearance, Zuma sports scratches on his neck and an oil stain on his garments. It is discovered that he has asthma and eats sunflower seeds.

Zuma was flagged as a suspect with no laboratory intervention required after Amy and the player found a stone tablet (restored by the player) in the Aztec ruins where Burt was murdered—although a phone call to Hannah was required to confirm the Mesoamerican stone tablet belonged to the Aztecs.

Amy approached the Aztec chief about the Mesoamerican stone tablet, but Zuma informed the team that it is an ancient calendar of the stars, illustrating a sacrifice. Amy countered that the calendar was styled the same way the murder happened, to which Zuma hated the idea of Burt treating Aztec artifacts as if they were treasure.

Zuma would be questioned for a second time after Amy and the player found a painted skull (restored by the player) containing Burt's initials not to mention a bird symbol on top of the skull's forehead was deciphered to be the emblem used in Zuma's Aztec tribe, holding Zuma accountable for the skull's paintings. Zuma intended to use the skull's painting as a curse to take revenge against Burt for certain trickery. All Burt wanted was the location of the lost temple which took the victim a couple of chili peppers to get the Aztec leader drunk in which Burt succeeded in doing so. Zuma never liked the way Burt treated the Aztecs, so he painted the skull to infuse a curse against the archaeologist. Zuma was found innocent in spite of his grudge against Burt.

Zuma found himself in trouble once again after the team found a torn photo inside the bio-lab of victim Bruce Green, which, after being restored, showed the victim wearing an Aztec headpiece like the tribal leader. When asked about the headpiece, Zuma explained that he gave the headpiece to the victim as a gift. Bruce had come to learn about the desert, and the Aztec chief respected his interest in Mother Nature. They became friends as Zuma explained that it was not often that he met people who were humble enough to ask for his wisdom.

Zuma was approached again when the team found a slab telling Bruce to not "play God". The Aztec chief explained that while he was friends with the victim, he did not approve of everything the latter did. They would fight often about the victim's experiments and his God-complex because the chief believed that Mother Nature made the desert dry for a reason and that Man must change due to the pollution mankind has left behind.

Zuma was found innocent of murder once again. Hours after the indictment, Amy and the player approached him with an Aztec stone they had found in Dust Town. Zuma explained that the stone represented the Aztec calendar, and it could either signify the end of the world or their gods returning to them, depending on who the person was. He also told the team that Ezra Hope had reacted badly when he explained it to the latter, causing the hippie to blame big companies like the oil well for pollution. 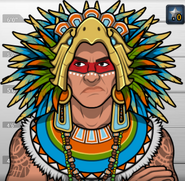 Zuma, as he appeared in Temple of Doom (Case #40 of Pacific Bay). 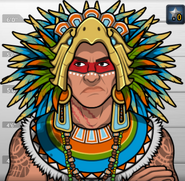 Zuma, as he appeared in The Seeds of Death (Case #41 of Pacific Bay). 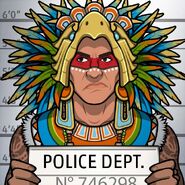 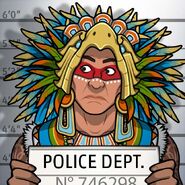 Retrieved from "https://criminalcasegame.fandom.com/wiki/Zuma_Tlatoani?oldid=492177"
Community content is available under CC-BY-SA unless otherwise noted.