Zosime (Grk: Ζωσιμη) was the killer of her husband, High Priest Pelagios, in A Greek Tragedy (Case #4 of Travel in Time).

Zosime is the 43-year-old pregnant wife of the victim. She has mid-length, wavy brown hair and sports a gray dress with two white stripes at the collar and shoulder straps with a blue meander pattern. Additionally, she wears light red lipstick and a gold bulbous necklace. It is known that Zosime is good at archery, eats tzatziki and knows chemistry.

Zosime became a suspect after Zara and the player learned that she was the victim's wife. After being told that her husband was dead, Zosime broke down and wondered what would become of her and their unborn child. She explained that Pelagios had viewed her pregnancy as a miracle due to her old age and saw it as a sign that they would be an eternal family.

Zosime was spoken to again about her presence at the crime scene. She told the team that she had gone to Mount Olympus to pray for everyone to leave her unborn baby alone. She revealed that Pelagios had exploited her pregnancy and told everyone to touch her belly as the pregnancy was a miracle from the gods. She told the team that her situation had caused her unmanageable stress.

In the end, it was proven that Zosime was Pelagios' killer. Zosime told the team that Pelagios was planning to force her to have an abortion when she was informed that their baby would be a girl. Not wanting to lose her baby, Zosime shot Pelagios with a poisoned arrow. The city guard allowed Zosime not to be banished from the city as she was "carrying the miracle boy of Zeus" but Zosime chose to accept her punishment instead to live with some of her family in the small village of Agapelpida. 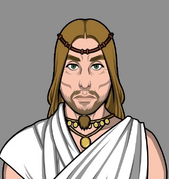 Pelagios, Zosime's late husband.
Add a photo to this gallery

Retrieved from "https://criminalcasegame.fandom.com/wiki/Zosime?oldid=511125"
Community content is available under CC-BY-SA unless otherwise noted.