Ziggy Sparks was a suspect in the murder investigation of DJ Kalua Kaboom in Murder on the Dance Floor (Case #15 of The Conspiracy).

Ziggy is a 27-year-old store assistant at Magical Mystery Records. He has black frizzy hair, green eyes, freckles, and a beard and mustache. He wears a gray T-shirt with a heterochromic hairless cat printed on it, two earrings on his left ear, and a nose ring, as well as a red-and-green striped bracelet around his left wrist. He additionally sports navy blue nail polish, two piercings on his chest, and tribal tattoo markings on his left arm. It is known that Ziggy eats waffle pops, uses a Kameroid 260, and takes Scrappy Snacks.

Jones and the player first talked to Ziggy after finding out he was an employee at a records store that Kalua last visited. Ziggy said Kalua liked the vintage, so she often came to the store to pick up records. When informed that she was dead, Ziggy said that Kalua stopped by, had a smoke, and talked tunes as usual that day.

Jones and the player later found a recording of Ziggy interviewing Kalua that proved that he was furious at the victim. Ziggy said that Kalua was remixing the old classics with electronic beats, "desecrating" them. He then said that Kalua was chill before she started going on crazy rants about everything from cheese to video games.

Ziggy was proven innocent when the team arrested partygoer Robyn Ash for the murder. Amir and the player later talked to Ziggy after finding out Rupert passed by the shop to fulfill a task in his virtual reality game. Ziggy said that a lot of people wearing VR headsets came into the store to ask for "Housework", including someone whose description matched Rupert's. Ziggy said that he was muttering about going back to the laboratory and that he paid $100 for the $10 record. After the player unlocked the record, Ziggy gave the two Rupert's change before the two left to find Rupert. 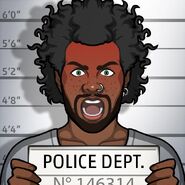 Retrieved from "https://criminalcasegame.fandom.com/wiki/Ziggy_Sparks?oldid=427902"
Community content is available under CC-BY-SA unless otherwise noted.