Zhōu Lì (Chn: 周丽) was a suspect in the murder investigation of CEO Ernest Turing in Smart Money (Case #46 of Pacific Bay).

Zhou is a 19-year-old Meteor Systems factory worker from China. She wears a green dress and a hairnet, and has stains all over her. She is seen holding a screwdriver with a blue handle. It is known that Zhou practices yoga, reads comic books and knows binary.

Amy and the player first interrogated Zhou when Hannah found who wrote a message requesting help. Zhou panicked when the police came, but when asked about the message she said that she worked day and night, yet the victim did not pay her. Despite this, she insisted that she was not angry with the victim as he gave her a yoga mat as a gift. Zhou went back to panicking after hearing of Ernest Turing's death.

Zhou was due for another interrogation after the team found a deportation order written by the victim for her. When asked about the deportation order, Zhou said that she had researched law and found out that the victim could not work her without paying her. However, the victim then threatened her by saying if she stopped working, then he would make her leave the country. She said she was thankful that Ernest was dead as she can now find another job so she could get paid.

Zhou was found innocent after Per-Sephone was found guilty of Ernest Turing's murder. 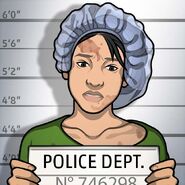 Retrieved from "https://criminalcasegame.fandom.com/wiki/Zhou_Li?oldid=413869"
Community content is available under CC-BY-SA unless otherwise noted.