William Lewis (appearing as Zeus) was a suspect in the murder investigation of GBPD detective Ed Dunkin in Good Cop Dead Cop (Case #6 of Grimsborough).

Zeus is a 28-year-old African-American pimp of slender build with a bright purple hat covering his black dreadlock hair. He has a mustache connected to his beard. He is commonly seen wearing a black pimp coat that covers a suit with a blue tie.

Zeus was called in when the police discovered that Ed frequently used to call him about prostitutes. The police did thorough investigation, but found nothing to incriminate Zeus. He also told Jones and the player he had an agreement with Ed. Zeus would let him use his prostitutes' services free of charge, and Zeus's escorts would not be arrested by the police. They spoke to him if Ed had any reason to be murdered by someone else. He was eventually let go when Harry Landry was convicted. 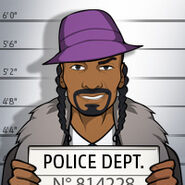 Retrieved from "https://criminalcasegame.fandom.com/wiki/Zeus?oldid=439135"
Community content is available under CC-BY-SA unless otherwise noted.