Zeke is a demon assuming the guise of a 28-year-old environmental activist.

In his human form, he has green eyes, a short red afro, matching stubble and freckles. He is seen wearing a green t-shirt emblazoned with a lizard and the words "YOU'RE A LIZARD, HARRY!".

In his demon form, he has orange skin, pointed ears, wings and red eyes. He maintains his freckles and stubble and sports black horns and matching claws.

In his first appearance, is known that Zeke reads tarot cards, plays the Navajo flute and takes spirulina.

In his second appearance, it is discovered that he eats chicken fried steak, is scared of the dark and listens to Billie Kelson.

In his third appearance, Zeke wears a light brown winter coat with brown fur over his shirt. He also sports a maroon scarf around his neck. It is revealed that he eats lakeweed, goes underwater fishing, has watched Ridgeback Mountain and reads Life Aquatic magazine.

In his fourth appearance, it is noted that he is right-handed, eats protein bars and uses hand warmers.

Zeke became a suspect after he alerted Gwen and the player to the presence of the crystal caves during his search for his celadon dragon. Zeke guided the team to the caves and identified himself as an environmentalist. Gwen then informed him that someone had used a crystal to murder someone. Zeke claimed not to know the victim and then left to chill out.

Zeke was spoken to again about the victim suing him. He revealed that he had denied Rainee access to the caves because her chants were damaging the ears of the celadon dragons. While he tried to warn her, Rainee did not listen to him.

Zeke was found to be innocent after the team incarcerated Jesse Adams for Rainee's murder. Later, Luke and the player asked Zeke about the unexplained livestock deaths. After Luke mentioned that the sheep were tainted with faint traces of sulfur, Zeke revealed that the trend had been noted in the Southwest for the last five years.

Zeke became a suspect again after Luke and the player found his lizard at the scene of the murder. He explained that Fielding had gotten in touch with him a few days prior to the murder to discuss how his company could go greener. Zeke told the team that it was a shame that someone had killed Fielding before he could implement the changes they had discussed.

Zeke was spoken to again about him stomping on Fielding's hat. He revealed that their meeting had actually been Fielding's attempt to blackmail Zeke into silence with photos of Zeke being environmentally unfriendly. Zeke swore to the team that the photos had been doctored, but they would have destroyed his reputation regardless. Having lost his temper, Zeke threw Fielding's hat on the floor and stomped on it.

Zeke was found to be innocent again after the team incarcerated Axel Bross for Fielding's murder.

Zeke was spoken to again about the victim taking out a restraining order against him. He informed the team that he had discovered that the victim was his biological father and that he had been the product of a one-night stand. Since his mother refused to tell him the identity of his father, Zeke did his own research, leading him to Wyatt. However, Wyatt refused to acknowledge Zeke as his son and took out the restraining order.

Zeke was found to be innocent for the third time after the team incarcerated Poppy Winters for Wyatt's murder. Later, Zeke, Felix and the player went to see Hannah, the lake monster. Hannah attempted to communicate with the team, but they were unable to understand her. Felix realized that they needed a sonar voice converter to understand what Hannah was saying.

After Felix crafted a makeshift voice converter, the group revisited Hannah, who thanked the team for clearing her name for the murder. She requested that the group retrieved her pearl necklace that Wyatt had stolen from her. The group found the necklace and returned it to Hannah, who bid farewell to them.

Zeke became a suspect once again after Gwen and the player found his sketchbook. He told the team that he was in Yellowstone to sightsee, although he felt that Yellowstone paled in comparison to seeing Hannah. Gwen then mentioned the magic tree and the murder, shocking Zeke, who claimed that he had never met the victim. Gwen also asked how Zeke would react if they told him that demons were behind the sheep dropping dead in the Southwest; he told the team that he would not believe them.

Zeke was spoken to again about his net and a message that implied that he was trying to catch a werewolf. He revealed that he had witnessed Annette transforming into a werewolf whilst lizard spotting one night. The next night, he asked if he could study her, but she refused. As such, he attempted to catch her when she transformed again. However, she ripped the net out of Zeke's hands, prompting him to run away.

In the end, it was proven that Zeke was Annette's killer. When he was confronted, Zeke revealed himself to be the demon that Fielding, Jesse, Justine Bankston and their associates summoned in Amarillo five years prior. Zeke then admitted that he killed Annette after she tried putting up a fight as he was taking the tree core. He then said that he would be taking it to the Netherworld before teleporting away.

After Zeke teleported away, the team prepared themselves for their inevitable confrontation with him. After consulting with Chief Arrow's former mentor, Falcon, Chief Arrow and the player (per Ben) bolstered their weapons with essence from the magic tree. The team then found a message from Zeke at the viewpoint telling them to meet him at midnight.

At midnight, Chief Arrow, Ben and the player confronted Zeke in his demon form. He taunted the team before melting their guns after Ben tried to shoot him. He then revealed that he could read the team's thoughts and prepared to kill them. However, before he could do so, a mystery demon appeared and banished Zeke to the Netherworld. The mystery demon was revealed to be novelist Arthur Darkwood. 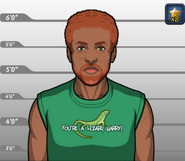 Zeke, as he appeared in Bad Vibes (Case #6 of Supernatural Investigations). 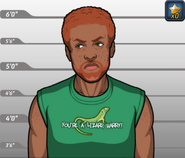 Zeke, as he appeared in The Ghost of Murders Past (Case #10 of Supernatural Investigations). 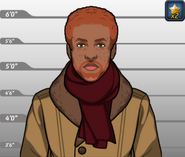 Zeke, revealing himself as a demon during his arrest for Annette Strong's murder.

Zeke, banished back to the Netherworld for the crimes he had done on Earth, including the murder of Annette Strong and the theft of the magic tree core.
Add a photo to this gallery

Retrieved from "https://criminalcasegame.fandom.com/wiki/Zeke_Davis?oldid=522024"
Community content is available under CC-BY-SA unless otherwise noted.