Zarah Salah (Arab: زارة صلاح) was the killer of fruit vendor Afif Wahab in I Spy a Mummy (Case #10 of World Edition).

Zarah is the 50-year-old Minister of antiquities. She has short black hair, brown eyes, two crescent-shaped earrings and wears lipstick. She dons a navy blue suit jacket with a scarab pin on it over a magenta shirt. It is known that Zarah eats pickled turnips, smokes hookah and reads hieroglyphs.

Zarah was interrogated by the player and Jack after they found a plaque on the crime scene saying to call her in case of desecration. She confirmed the victim was Afif Wahab, a fruit vendor who worked by the Nile. When asked if anyone who would want to hurt him, she said he was a simple man. However, she said she heard there was trouble between him and another vendor. She asked if The Bureau will release the crime scene soon, Jack replied saying it will be once the killer is caught.

Zarah was interrogated again regarding a bunch of money belonging to the Egyptian Ministry of Antiquities. She said she left the money in the tomb by mistake because she believed that Afif set up his stall by the Nile so he could steal from the pyramids. To catch him red-handed she set up a trap, she met him at the hookah bar saying she was a foreign traveler looking to buy antiquities. She convinced him to meet up at the pyramids for the swap, and saw the antiquity he was trying to sell her was a fake. When Jack suggested she killed him because he swindled her, she replied saying she turned him down and returned to the Ministry.

Despite her tale, she was eventually found out and was revealed to be Afif's killer. After denying involvement, Zarah admitted to the crime. She wanted to steal ancient artifacts from the pyramids to make profit out of them, but Afif was always one step ahead of her. She bribed him to make him refrain from stealing the antiquities, but Afif refused. Wanting to eliminate the competition, Zarah lured Afif to one of the pyramids and mummified him alive. Judge Adaku sentenced her to 50 years in jail. 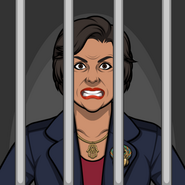 Zarah, sentenced to 50 years in jail for the murder of Afif Wahab and the theft of precious artifacts. 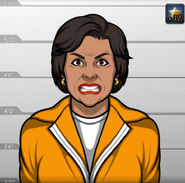 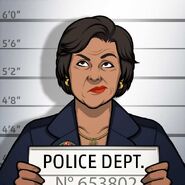 Retrieved from "https://criminalcasegame.fandom.com/wiki/Zarah_Salah?oldid=477765"
Community content is available under CC-BY-SA unless otherwise noted.