Zara Tien is a main character appearing in Season 6 of Criminal Case, where she serves as a partner to the player throughout the season as the Junior Temporal Agent of T.I.M.E.'s Temporal Crimes Division.

25 years old as of 2029, Zara has brown eyes and short dyed white hair with a purple tip at her left. She wears a grey shirt with a honeycomb pattern and a brown collar under a purple blouse with white at the shoulders. She also wears two golden triangles embedded to her shirt, black pants with white vertical stripes running down the sides, and black shoes.

Having a rough childhood, Zara is street smart and has issues with authority. However, getting in trouble led to her interest in police work. Zara is also enthusiastic and optimistic, and has a magnetic personality. It is known that Zara is into extreme sports, loud music, and sailing.

In her quasi-suspect appearance in When in Rome, she sports a green toga with a brown cord belt and brown leather shoulder pads with silver buttons and a silver buckle.

In her quasi-suspect appearance in Shipwrecked!, she dons her privateer's outfit: a blue jacket with gold lining and gold buttons over a beige shirt with black buttons and a white ruffled jabot. Additionally, she sports a black strap with a dark gray buckle across her body, from her right shoulder to her left hip.

In her suspect appearance in Bewitched, Bothered, Bewildered, she continues to wear her privateer's outfit. Additionally, her skin is blue and scaly due to a chemical reaction. It is known that Zara eats hardtack, uses citronella oil, is superstitious and uses calamine powder.

After solving their first case in Ancient Egypt, 47 BCE, Team Coordinator Amy introduced the player to Zara, their second partner alongside Jack. She congratulated the player for solving Julius Caesar's murder like a pro and was then assigned to help the player tie up the loose ends of their investigation.

After arresting Flavia Pulchra's killer, chariot racer Scorpius requested the team for help as he needed someone to assume his guise and replace him in the race as his arm was broken. Zara volunteered to take his place and, with help from Kai and Roman woman Balbina, properly equipped herself for the race. At the end of the investigation, the team wished Zara luck and watched her perform in the race, where she won.

After arresting Billy Snapshot's killer, Amy revealed her plan to send a message to Chief Scott in 2029 to help the team get out of the 1960s. She ordered Zara and Theo to assume the place of Chief Scott's parents at the bank and set up a safe deposit account in which they would leave him a letter that was to be opened in 2029. Zara and Theo successfully opened the account with help from banker Judy Strong and papers forged by Orlando and left a letter in it to be opened by Chief Scott in 2029.

After arresting Evangeline Rousseau's killer, Zara and the player dug for Captain Blackbeard's treasure in the middle of the village. They found the treasure and Zara held a bunch of coins from within the treasure chest.

Later, Zara alerted the team to the fact that she had turned blue and scaly. Theo posited that it was a reaction to touching Blackbeard's treasure. After the team boarded Captain Mary Read's ship, Jack suggested that the treasure was cursed. Since Zara had touched the treasure, she had been cursed by it. Mary then revealed that she knew a voodoo priestess living on Skull Island who could break the spell.

Mid-investigation, Zara told the team that she had made her peace with being a fish forever and had accepted her fate. Janis then took Zara aside to comfort her.

Zara was spoken to again about her fight with the victim. She revealed that she had bumped into Agwé and begged him to let her see the priestess. However, he refused, making her lose her temper and prompting her to hit him. She told the team that she was ashamed of what she had done and tried to apologize, but Agwé claimed that she would be cursed forever for offending the voodoo gods.

Zara was found to be innocent after the team incarcerated Jorge de la Cruz for Agwé's murder. Later, Zara and the player visited voodoo priestess Jemimah Mabayo and asked her to lift Zara's curse. Jemimah told them that she needed Midnight Magnolia flowers from the swamp to cure her. After they found the flowers and Theo sent them to Jemimah, Zara and the player visited the priestess to see if she had prepared the cure. She told them that she had prepared a powder and instructed Zara to dissolve it in water and drink it. After they found the powder, Theo dissolved it and gave it to Zara to drink, curing her.

Occasionally, Zara is tasked to act as a proxy for experts the team meet while on the field when expertise cannot be gathered from inside the laboratory. She then informs the team of such results after a certain amount of time or a speed-up process using Criminal Case Cash. Her task-wait rates vary depending on the difficulty of the task, but they all cost 1 Criminal Case Cash per 30 minutes.

Below is the list of analyses Zara acts as a proxy throughout the course of the game:

The player may choose Zara to join the investigation of each crime scene (in any Travel in Time cases where she teams up with the player) and provide hint bonuses. She is available as a 1-hint partner. 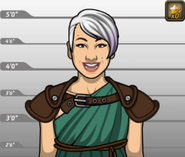 Zara, as she appeared in When in Rome (Case #3 of Travel in Time). 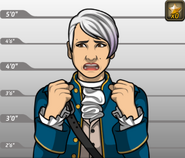 Zara, as she appeared in Shipwrecked! (Case #23 of Travel in Time). 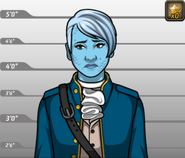 Zara, as she appeared in Bewitched, Bothered, Bewildered (Case #24 of Travel in Time). 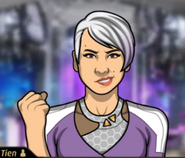 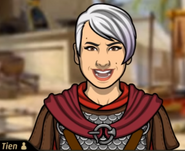 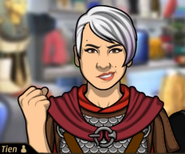 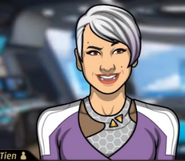 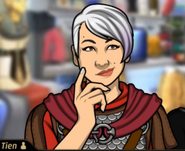 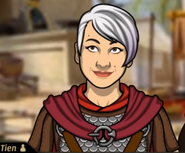 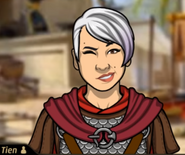 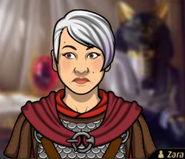 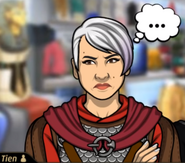 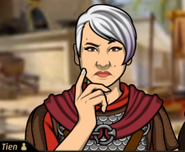 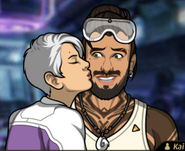 Zara kissing Kai on the cheek. 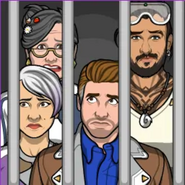 Zara, along with T.I.M.E.'s Temporal Crimes Division personnel, arrested for conspiring against the Ptolemy Dynasty. 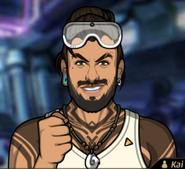 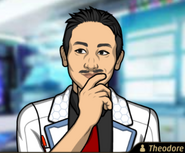 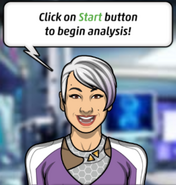 The player may choose Zara to join the investigation of each crime scene (in any Travel in Time case she teams up with the player) and provide hint bonuses. 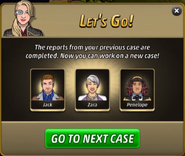 Zara fills in a report for the player. 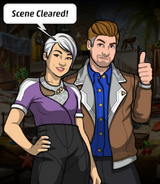 Zara and Jack will validate the player's final score once a scene is solved.

Zara, as seen on the Travel in Time Sticker Pack, along with Jack. 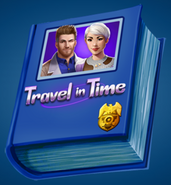 Zara, as seen on the Travel in Time Sticker Album, along with Jack. 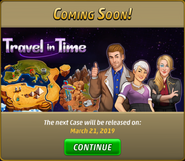 Startup screen (Criminal Case: Travel in Time).
Add a photo to this gallery

Zara appearing in a promotional piece of artwork for Travel in Time.
Add a photo to this gallery

Retrieved from "https://criminalcasegame.fandom.com/wiki/Zara_Tien?oldid=545671"
Community content is available under CC-BY-SA unless otherwise noted.