Zack Taylor was a suspect in the murder investigations of his boyfriend, reality TV star Jimmy "Ice P" Lewis, in Shark Attack! (Case #1 of Pacific Bay) and blogger Becky Walden in The Ice Queen (Case #5 of Pacific Bay).

In his first appearance, he has a jellyfish sting on his right shoulder and sports a shell necklace. It is known that Zack is in contact with parrots and eats hot dogs.

In his second appearance, he ditches the shell necklace and it is observed that his sting has healed, only to be replaced with a huge burn mark. Furthermore, it is discovered that he listens to electronic music, uses a GPS device, and drinks cocktails.

The first time Zack was called into the investigation, Amy and the player found a faded paper powdered into a waiver with Zack Taylor's name on it. Amy called Hannah to find where Zack was, and in spite of Hannah being in the middle of fixing a computer problem, she managed to track Zack on-duty at Sunny Beach. Having spotted Zack at the lifeguard's chair, Amy mentioned about Zack being a regular on the Ice P Show, but Zack told the team he met Ice P when he fell off a cruise boat to recreate the incident of the Titanic of 1918, but panicked and had to come to the rescue, alas Ice P panicked when he saw Zack's pet parrot in the premise.

Chief Marquez gave a torn photo to the team and when pieced back together, showed Zack and Ice P kissing at the Tiki Bar. This caused the team to talk to Zack in the middle of his hot dog cooking, but given the nature of the photo Zack wanted the police to keep the photo a secret as he was afraid of losing his position as a lifeguard of Sunny Beach if the public found out. The nature of the discussion and financial hardships stressed Zack out.

Zack was proven innocent at the climax of the investigation, and even offered the team help to find Augusta to prevent her from going completely missing.

Zack found himself in the red when Frank and the player pieced a torn t-shirt back together revealing Zack hanging around with Becky in a custom-made T-shirt. Frank could hardly imagine Zack being friends with a tech geek like Becky, but Zack wanted to make Becky feel good by cheering her up because too many people in Ocean Shore hated her.

The second time Zack was approached by the team was moments after Yann analyzed a t-shirt dampened with Becky's tears, in which Yann said Becky was crying with a broken heart. Frank accused Zack of breaking Becky's heart but Zack told the team he took Becky out clubbing at the Little Mermaid club (Becky had free admission) but when Becky found Zack kissing a guy, she was furious that she would blog his LGBT standing through Friendnet and ran away from the Little Mermaid without warning. Zack wanted to stop Becky but not to the point of homicide—which was proven true when Derek Stone was indicted for Becky's murder.

The team would tend to Zack moments after the arrest to ensure Zack was all right in spite of him being beaten up by Lenny Spitfire's monkey in the boardwalk. 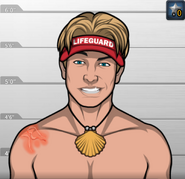 Zack, as he appeared in Shark Attack! (Case #1 of Pacific Bay). 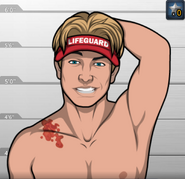 Zack, as he appeared in The Ice Queen (Case #5 of Pacific Bay). 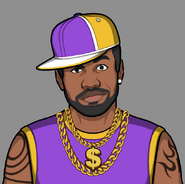 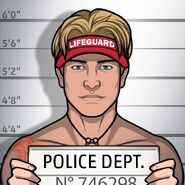 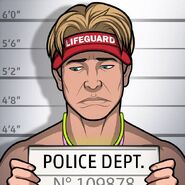 Retrieved from "https://criminalcasegame.fandom.com/wiki/Zack_Taylor?oldid=409017"
Community content is available under CC-BY-SA unless otherwise noted.