Zachary Partridge, appearing as a minor character in Criminal Case, was mentioned during the events of Snake in the Grass (Case #1 of The Conspiracy).

Zachary has brown hair, brown eyes, and a light five o'clock shadow. He is seen wearing a red and white long-sleeved jacket and a blue cap with an orange logo on it.

Ten years prior to the events of the case, Zachary was caught during a drug bust operation. Because his father, Kit Partridge, believed that he was a good kid in the wrong crowd, Kit asked his colleague, Nathan, to doctor the evidence to his favor. Nathan refused to give up his ethical code and reported the right evidence, leading to Zachary's incarceration. This incident would later lead Kit to murder Nathan. 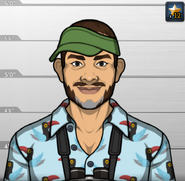 Kit Partridge, Zachary's father.
Add a photo to this gallery

Retrieved from "https://criminalcasegame.fandom.com/wiki/Zachary_Partridge?oldid=409030"
Community content is available under CC-BY-SA unless otherwise noted.