Yūto Watanabe (Jpn: 渡辺悠斗) was the victim in A Death Wish (Case #29 of World Edition).

Yuto was the family boss of the Watanabe-gumi yakuza group. He had gray hair and dark brown eyes, and was wearing a white suit and hat at the time of his death.

Yuto was found in an arcade with a sword through his stomach and a gunshot wound on his head. His body was sent to Angela, where she determined the shot to the head was the killing blow. Per Lars, she also determined that the victim was shot in the shoulder in the yakuza office before being shot in the head in the arcade. The stab wound was self-inflicted, leading Angela to believe Yuto tried to end his own life via hara-kiri/seppuku after he knew he would be killed. She also found an origami crane in his suit jacket with the message "This is #1000. Now you are dead." According to her, a Japanese legend state those who fold a thousand origami cranes will be granted a wish. With that in mind, it meant the killer knew origami.

After examining the arcade again, Jack and the player managed to find a gun hidden in a claw machine. It was sent off to Jonah and he managed to determine that it was the murder weapon. Jonah tracked down its serial number and determined it belonged to a deceased person. June Douglas then came in and said her dad found traces of highly chlorinated water mixed with the gun residue around the grip. Jonah said the only way to find highly chlorinated water like that was in a sento bath, which meant the killer took sento baths.

Yuto had his nephew, Shiro Watanabe (who was the fiancée of Yuto's English tutor, Emily Wallace), as well as Ronin Ozawa in his yakuza. made a strategic alliance with SOMBRA prior to his death, but Ronin said that Yuto "got too greedy". Yuto himself was preying on schoolgirl Suzuki Sakura, even getting her to go to a sex party where he tried to drug her in exchange for him leaving her alone. Yuto had given Sanjay Korrapati a knife for self-defense, which Sanjay used to cut his own finger off.

The killer turned out to be Emily.

After denying involvement, Emily admitted that she shot and killed Yuto to avenge Shiro's death. Shiro had left the yakuza and had taken a lot of their money to marry Emily. During their wedding day, Yuto shot Shiro dead and attempted to kill Emily, leaving her for dead. Surviving the incident, Emily plotted her revenge and shot Yuto with Shiro's old gun before he could successfully commit seppuku. Judge Adaku sentenced her to 10 years in prison. 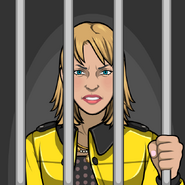 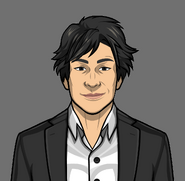 Retrieved from "https://criminalcasegame.fandom.com/wiki/Yuto_Watanabe?oldid=490883"
Community content is available under CC-BY-SA unless otherwise noted.