Yan Gobin was a suspect in the murder investigation of pilot Walter Fairbanks in One Wedding and a Funeral (Case #47 of Grimsborough).

Yan is the 51-year-old chief mechanic for the victim's planes. He has brown eyes and gray hair which is covered by his aviator cap. He also sports a pair of aviator glasses which is seen on the upper side of his aviator cap. He is seen wearing a blue shirt which has 2 pockets, with a "VOTE RED" campaign badge on the right side. He also has some oil stains on his shirt and in one of his pockets, he holds a wrench. It is known that Yan knows aeronautics and has chemistry knowledge.

Yan was called into the investigation after Walter's stunt plane crash-landed on the scene of the crime (wedding party). Jones and the player felt that Yan was the one who sabotaged the plane, but he claimed that he had double-checked the plane to make sure it was in working condition. He also said he was unaware about anyone flying out of his radar, but he would never transgress as it would damage his career as an aviation mechanic.

Yan was interrogated for a second time when the team found a flight recorder which fell from Walter's plane, extracted the data, and found the voice to be Yan's. The team wanted to know as to why he and Walter were fighting via radio broadcast. According to Yan, Walter was accusing him of having badly prepared the stunt plane, which Yan felt was unfair because he had designed all the maintenance products himself and this was the first time a problem had occurred. Yan also told the team that all Walter wanted to do was to use planes to flirt with women as if he had lost interest in the aviation industry.

In an act of cooperation, Yan told the team about Molly Mocard's suicide attempt at the West Bridge, enabling the team to intercept Molly before she succeeded. He was subsequently found innocent when Esteban Vallez was indicted for Walter's murder. 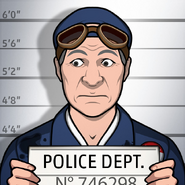 Retrieved from "https://criminalcasegame.fandom.com/wiki/Yan_Gobin?oldid=409015"
Community content is available under CC-BY-SA unless otherwise noted.