Yamil Albarran was a suspect in the murder investigation of Olympic athlete Oscar Rojas in Cheaters Never Win (Case #47 of World Edition).

Yamil is a 53-year-old coach from Luzaguay. He has short graying brown hair with a black and goose gray coach's visor atop his head. He has a black right eye, and a moustache and beard. He dons a black, white, and yellow jacket over a blue-collared shirt, and has a whistle around his neck. It is known that Yamil does capoeira, is superstitious, and drinks caipirinha.

Yamil became a suspect after the player and Michelle found his stopwatch in the victim's sports bag. He was shocked at Oscar's death, saying he was dedicated and had a great future. Michelle demanded that he talk about the victim's connections to SOMBRA due to his yellow eyes, but he said the victim had brown eyes, not yellow. He also said he knew nothing about SOMBRA; all he knew was that his country sponsored a training camp in Indonesia, he could not go due to a personal issue but the team returned better than ever.

Yamil was spoken to again regarding a recorded argument of him and the victim, where the victim gave him a black eye. He explained that the victim was angry and blind with rage, and when Michelle brought up SOMBRA again Yamil insisted he had no idea about them. He was there to make Oscar the best athlete he could be, and he did not need dope to make that happen.

Yamil was found to be innocent after the team incarcerated Edson Caetano for Oscar's murder. 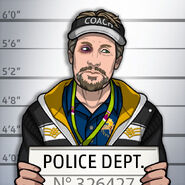 Retrieved from "https://criminalcasegame.fandom.com/wiki/Yamil_Albarran?oldid=409021"
Community content is available under CC-BY-SA unless otherwise noted.