Captain William Fox was a suspect in the murder investigation of artist Theo Vergeer in That Sinking Feeling (Case #11 of Mysteries of the Past).

William Fox is the 63-year-old captain of the Gigantic. He has white hair and a white beard. He wears a black sea captain's uniform with a white hat and a Gigantic pin on the uniform. He also has a guano stain on the left shoulder of his uniform. It is known that William knows ballroom dancing.

William first spoke to the player and Maddie when they entered the ship. Though Maddie was happy to be onboard, she said they were there to investigate one of the guests, but he also asked if they could find Theo Vergeer, who was a guest of honor on the ship. Unfortunately, he was found murdered, and the team had to inform the captain after they found the victim's invitation. He was shocked to hear of it, and said he invited the victim to his table as an artist like him would have made for interesting conversation.

William had to be spoken to again after they found a painting of the Gigantic sinking, which had a stain of rum. He was furious at the victim for making that painting, and never expected the victim to paint something like that when he was asked to make some paintings. After that, he confronted the victim and told him there were to be no more paintings or else he would be confined to his quarters for the entire voyage.

In the end, William was found to be innocent after the team incarcerated Renée Daucourt for Theo's murder. However, the player and Charlie spoke to him again about the ship's ability to be unsinkable. Charlie explained it all came down to the speed the ship sailed, if it sailed slower then it would take longer for the watertight compartments to work. William said he would make sure to watch his speed, but still had doubts as he felt there was not anything out in the middle of the sea. 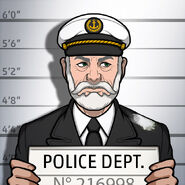 Retrieved from "https://criminalcasegame.fandom.com/wiki/William_Fox?oldid=421994"
Community content is available under CC-BY-SA unless otherwise noted.