Criminal Case (mentioned)
William Cooper, appearing as a minor character in Criminal Case, was mentioned during the events of multiple cases in Grimsborough, as well as in Stonewalled (Case #8 of The Conspiracy).

William was a bald man with spectacles. On his statue located in Cooper Park, he is seen holding a cane and sporting a classic shirt along with a cloak and a pair of pants, while standing next to Ellington, his pet dog.

William was the founder of the city of Grimsborough. He built the city in 1845 from what was only the leftovers of a small Pilgrim settlement. It is known that William and his dog Ellington had settled in the city's Historical Center.

Ashton Cooper happens to be William's only known descendant.

In A Brave New World, Ashton mentioned to the team that he was William's descendant, stating that Grimsborough was only the leftovers of a small Pilgrim settlement before William built it to a city in 1845. Ashton further told the team that the city had nothing to do with the pilgrims and that he viewed Grimsborough as his ancestor's lifelong work, as well as his family's. 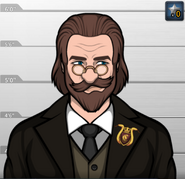 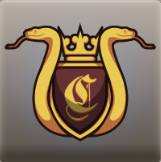 Coat of arms of the Cooper family.