William Butler was a suspect in the murder investigation of his adopted son, comic book artist Marcus Butler, in Color Me Murdered (Case #22 of The Conspiracy).

William is the 63-year-old adoptive father of the victim. He has grey hair, green eyes concealed behind a pair of glasses and notable aging wrinkles. He wears a navy blue collared shirt under a forest green blazer with green striped linings and a star print handkerchief. It is known that William takes vitamin D supplements.

William became a suspect after Jones and the player found the watch that he had given to the victim. He revealed that his son was the sweetest and most talented boy that they could imagine, and burst into tears when he wondered what he would do without his son.

William was spoken to again about his identity as the victim's adoptive father. He confessed that the victim was trying to find his biological father, which he did not understand. He then wondered how his son could do that to him.

William was found to be innocent after the team incarcerated Haruki Kato for Marcus' murder. 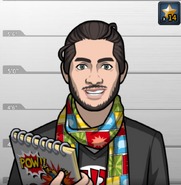 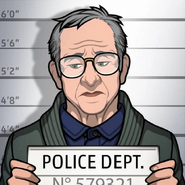 Retrieved from "https://criminalcasegame.fandom.com/wiki/William_Butler?oldid=517999"
Community content is available under CC-BY-SA unless otherwise noted.