Will Wyoming was the victim in Giving Up the Ghost (Case #26 of Mysteries of the Past).

Will was a resident of Devil's Ridge. He had short black hair, green eyes, a stubble, and chest hair. At the time of his death, he donned a light brown shirt with a black vest.

Will's body was found hanging from a tree in the main square of Devil's Ridge. Per Dick, Will was subdued with whiskey and dragged to a tree, where his killer hung him with a rope that was filed as the murder weapon. By looking at the rope closely, the coroner deduced that the body was hoisted up using a pulley, which would require a high knowledge in knot-tying to create, therefore concluding that the killer knew how to tie knots.

Will's father, Old Man Jeb Wyoming, argued with his son after Will tried to persuade him to leave Devil's Ridge. Postman Walter Abernathy was forced to endure Will stealing letters from the people who had left Devil's Ridge. Mobster wife Franca Capecchi faced prejudice from Will, who called her a dirty immigrant and told her to go back to her country after she asked him for his help. Caravan member Lucy Liang hired Will as a guide for her caravan, although she was unhappy about all the dangers he made the caravan go through to get to their destination. Will's ex-boyfriend, troubadour Ennis Sparhawk, composed a love song for him. However, he was unhappy with how Will was unable to accept his true feelings and their on-again off-again relationship.

The killer was revealed to be Lucy.

Lucy had hired Will to take her caravan to El Gordado, a place allegedly full of gold. Will then took them to Devil's Ridge and demanded double the payment to finish the trip. Knowing that no one could afford the price and angry at Will's demands, Lucy got him drunk with Whiplash whiskey and hanged him up on a tree. Judge Lawson sentenced Lucy to 11 years in prison. 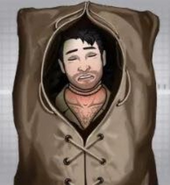 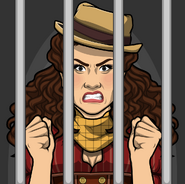 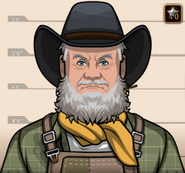 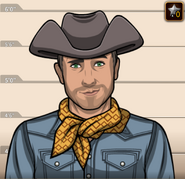 Ennis Sparhawk, Will's ex-boyfriend.
Add a photo to this gallery

Retrieved from "https://criminalcasegame.fandom.com/wiki/Will_Wyoming?oldid=527689"
Community content is available under CC-BY-SA unless otherwise noted.