Wilfred Turnscrew was the victim in Anatomy of a Murder (Case #24 of Grimsborough).

Wilfred was a famous crime writer who had a brother named Stanley Turnscrew, the tour guide of Grimsborough. One of Wilfred's most famous books was The Death of Rosie Woolf.

Wilfred had short brown hair and black eyes, wore a pair of brown glasses, donned a red jumper underneath a black jacket, and had a blue scarf around his neck.

When David Jones and the player were hanging out at the local museum, they suddenly noticed a Neanderthal man, who looked real and was inside a leopard print holding a spear towards the air. After a while, they realized that it really a human being and that it was a famous crime writer named Wilfred Turnscrew, so they then sent him to the lab for autopsy and closed the museum for crime investigation.

After having a close look at the museum's exhibit display, the team found a skinning knife. Then, they recovered the serial number of the knife and gave it to Alex Turner for tracing the owner. After completing the trace, Alex told the team that it belonged to James Savage, a hunter. He also said that Grace Delaney had checked the knife and had found faint traces of blood on it. The blood belonged to the victim, which meant that the skinning knife was the murder weapon.

Margaret Littlewood stated that Wilfred had a bad reputation in the Historical Center due to his writing being deemed bad and his latest novel bringing hordes of tourists to the usually quiet district, disrupting the peace and silence. One particularly disgruntled resident was hunter James Savage. Wilfred had reportedly taunted James prior to his death, telling him that he would buy out the forest. James then angrily beat Wilfred to unconsciousness but not to death.

Despite being related by blood, Wilfred and Stanley did not have a good relationship, with Wilfred accusing Stanley of making money off of his hard work due to Stanley organizing special tours of the city only highlighting sights mentioned in his book. In fact, Stanley had wanted to establish a gift shop at an abandoned garden in the district revolving around Wilfred's books and Stanley's dioramas, but Wilfred simply laughed at him.

Prior to his death, Wilfred had asked Mortimer Mutlog to taxidermy his cat, which apparently had started to rot. Mortimer said that Wilfred took every opportunity to criticize his work, apparently even basing the villain of his book, Morg. Mortimer had tried to sue Wilfred for libel due to this, but the lawsuit was turned down.

The killer turned out to be Grimsborough museum curator Cornelia Trent.

Since the people were more interested in Wilfred's books, they had stopped coming to the museum. Without visitors, Cornelia had to sell museum badges for money and to keep the museum alive. At last, she could not take it anymore, and after watching Wilfred get beaten up by James Savage, Cornelia took the opportunity and killed the writer with a skinning knife, then taxidermied him, and put him on display to get everyone's attention back to the museum. 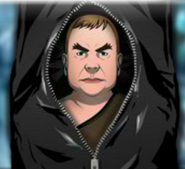 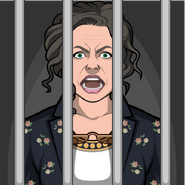 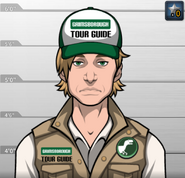 Stanley Turnscrew, Wilfred's brother.
Add a photo to this gallery

Retrieved from "https://criminalcasegame.fandom.com/wiki/Wilfred_Turnscrew?oldid=494346"
Community content is available under CC-BY-SA unless otherwise noted.