Wilbur Abernathy was a suspect in the murder investigation of Sheriff Roy Loukas in Like a Pig to the Slaughter (Case #46 of The Conspiracy).

Wilbur is a 61-year-old postman working for Spring Fields Post Office with grey hair, black eyes, facial hair and freckles. He is seen wearing a white collared shirt with a black tie underneath a blue coat with two front pockets, a name tag on the right side of his coat and the logo of "Turtlepost" on the left side. Additionally, he wears a blue cap with the logo of "Turtlepost" and a white earring on his right ear. Furthermore, he is seen holding a letter. It is known that Wilbur eats bacon, reads Animal Farm and uses a mud mask.

Wilbur became a suspect after Jones and the player learned that he was acquainted with the victim. He explained that the victim was a loyal customer at his post office and had lobbied to the local council to have Wilbur's long years of service recognized. After some minor questioning, Wilbur excused himself to get back to work.

Wilbur was spoken to again about his mail scam. After initially denying involvement, he confessed when told that the victim knew about the scam. He revealed that he had run an honest operation for decades, but since it had gotten him nowhere, he decided to rig the package scale to gain a bit more money. Jones and the player then took Wilbur into custody for theft.

Despite being arrested for theft, Wilbur was found to be innocent after the team incarcerated Lorenzo Sims for Roy's murder. 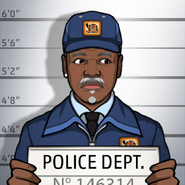 Retrieved from "https://criminalcasegame.fandom.com/wiki/Wilbur_Abernathy?oldid=462397"
Community content is available under CC-BY-SA unless otherwise noted.