Wendall is a 512-year-old wendigo. He has a pair of twisted brown horns, shoulder-length brown hair, and yellow eyes. He sports blood stains on his mouth, upper arms, and the left side of his chest, as well as several scratches around his torso. In addition, he sports a cross-shaped scar below his right eye.

In his first appearance, it is known that Wendall took a falls boat tour, drinks Niagara Falls cocktail and has high blood pressure.

In his second appearance, it is discovered that he eats pickled human remains, has read Dealing with Demons and knows the Supernatural Defense Pledge.

Wendall became a suspect after Luke and the player found his invitation to the supernatural ball and discovered that he was the owner of the abandoned cabin. After Luke assumed that he was wearing a costume, Wendall revealed that he was actually a wendigo. He told the team that he only knew the victim by reputation, prompting Wendall to keep a low profile at the party so that Ronnie did not figure out who he really was.

Wendall was spoken to again about him wanting Ronnie off of his property. He revealed that Ronnie was filming footage for his show by the cabin, following rumors that a wendigo lived there. Scared for his safety, Wendall made the sign in order to protect his territory.

In the end, it was proven that Wendall was Ronnie's killer. He said that Ronnie was planning to buy the abandoned cabin that he was inhabiting from the city council and move in. Despite not officially owning the cabin, Wendall saw this as Ronnie trying to steal his home and so strangled him when he refused to back down from the purchase. The team took Wendall to FBI paranormal expert Bucky Johnson for his punishment, although he said that he would outlive the punishment anyway.

Wendall became a suspect again after Gwen and the player learned (per Hope) that he had received an invitation to the Supernatural Alliance emergency meeting. After running into the team, Wendall revealed that he had escaped from the FBI's "inadequate" custody and taken the chance to attend the meeting. Gwen told him about the murder, angering Wendall as he believed that her killer was a demon saboteur. He asked if the team had uncovered the identity of Roxanne's killer, telling them that he would "take care" of them, even if it meant going back to prison. Gwen managed to calm Wendall down and told him to seek the team out if he had any useful information.

Wendall was spoken to again about his threat to Roxanne. He revealed that Roxanne had seen him as "half-demon", calling him a "sloppy, barbaric monster". He then mocked Roxanne, telling the team that she had not been there to take the Supernatural Defense Pledge with him and young witch Avery Mitchell. He also wondered how Roxanne would feel about him after he helped save the world from certain destruction.

Wendall was found to be innocent after the team incarcerated Fabien de la Mort for Roxanne's murder. 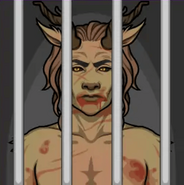 Wendall, turned over to the FBI's paranormal division for the murder of Ronnie Hawk.
Add a photo to this gallery

Retrieved from "https://criminalcasegame.fandom.com/wiki/Wendall_Goh?oldid=535600"
Community content is available under CC-BY-SA unless otherwise noted.