Welcome to Concordia! is a case featured in Criminal Case as the first case of Mysteries of the Past (Season 4) and the one-hundred seventy-second case overall. It takes place in the New Haven district of Concordia.

Maddie and Charles greeted the player on the docks, where they heard a scream nearby. Maddie and the player then found the poisoned body of Frank Vogel, the Lieutenant General of the New Haven Immigration Center.

During the investigation, Evie found out that Officer Raines of the Concordian Police Department filed a report about an altercation with the victim. Later on, Chief Wright greeted the player in the airship of the Concordian Flying Squad, only for him to leave for a soirée before he could brief the player about the squad's primary mission. They then found enough evidence to arrest Nellie Mortimer for the murder.

Nellie denied the accusations, but eventually admitted guilt. She said that during her affair with Frank, he had given her syphilis. Because of his apathy towards the women he slept with, Nellie put arsenic in his stout to stop him from infecting more women. Judge Takakura then sentenced her to 13 years in prison.

After the trial, Chief Wright said to the player that the Squad branched off from the police after several years of police corruption, and that their mission was to arrest corrupt, law-breaking officers. He then told the player of suspicious activity in the tavern.

In the tavern, Maddie and the player found distilling equipment which (per Viola) was used to brew illegal moonshine. The two talked to tavern owner Walter Lombardi, who was frustrated that he was caught despite bribing a member of the police department. The two later found Officer Raines's badge in the tavern, prompting Chief Wright and the player to question him. After Raines admitted to the bribery, Chief Wright relieved him of his post.

Meanwhile, Charles and the player reunited young immigrant Harriet Patrick with her cousin, Mary Patrick, with the help of Father Donovan, also taking the time to test Charles' new milking machine. After all the events, Maddie suggested that Charles write his adventures down in his journal. Evie then said that the town crier had reported a fire breaking out in New Haven.

Nellie Mortimer
Add a photo to this gallery

Officer Raines
Add a photo to this gallery 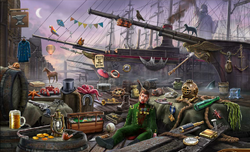 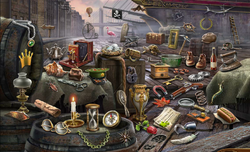 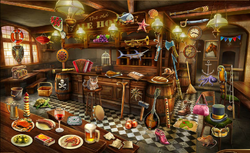 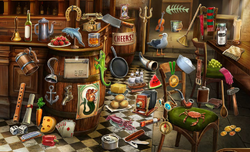 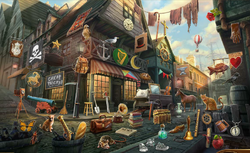 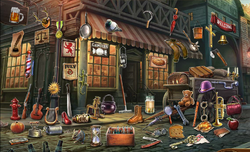 Tavern Doorway
Add a photo to this gallery

Retrieved from "https://criminalcasegame.fandom.com/wiki/Welcome_to_Concordia!?oldid=409162"
Community content is available under CC-BY-SA unless otherwise noted.