Wayne Billings was a suspect in the murder investigation of reenactment actor Joe Stanford in Open Wounds (Case #20 of Pacific Bay).

Wayne is a 51-year-old African-American reenactment reject with short black hair concealed underneath a blue Unionist soldier cap. He has black eyes and a black and graying moustache. He dons a blue Unionist soldier uniform from the American Civil War time period. He wears a brown sash across his left shoulder with a golden buckle and the American flag at the top. There's also a cotton flower with three cotton buds sprouting from it. His blue attire also has a soot stain. It is known that Wayne drinks mint julep and reads Abraham Lincoln.

Wayne found himself in trouble immediately after Roxie found broken wood fragments on the victim's body prompting the player to identify it as a gifted compass remitted from Wayne. Wayne gave Joe the compass, but was sad because with Joe gone, the future of the reenactment would be grim. Wayne believed that the American Civil War was a topic that stirred tensions from the past to present-day Pacific Bay. The reenactment was a show that helped a lot of people understand the Civil War but was not tailored to everyone's liking.

Wayne was due for a second discussion after Frank and the player unraveled a reenactment form in which Wayne was rejected because of his race. Joe did not believe that there was an African-American regiment which fought alongside Caucasian regiments in the Union side of the Civil War. The treatment, Wayne told the team, was not to the best of Abraham Lincoln's beliefs but Wayne's rejection had nothing to do with the murder when Harriet Davis was impounded for grand homicide. 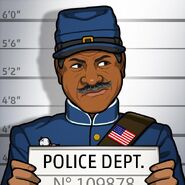 Retrieved from "https://criminalcasegame.fandom.com/wiki/Wayne_Billings?oldid=413818"
Community content is available under CC-BY-SA unless otherwise noted.