Walter Lombardi was a suspect in the murder investigation of Lieutenant General Frank Vogel in Welcome to Concordia! (Case #1 of Mysteries of the Past).

Walter is a 41-year-old tavern owner. He has neat black hair and mustache, and usually dons a white shirt with a white starched collar underneath a striped light brown vest and a black bowtie. It is known that Walter has head lice, reads the Concordian Gazette and drinks absinthe.

Walter became a suspect after the player and Maddie after they found the plaque indicating he owned the tavern the victim frequented. He recognized the victim, and was surprised to hear he was murdered. When asked if he knew of any enemies he might have had, Walter said he had no clue, as he was not someone who started fights and the like.

Walter was spoken to again about lantern pistol being found out on Main Street. He was glad to have it back, as he used it to keep Irish immigrants from starting fights in his tavern. He felt they were always causing trouble, and informed the victim he should not have allowed so many into the country. Maddie called him out since his ancestors had to have been immigrants themselves, but Walter replied saying his parents worked to integrate while the Irish do nothing of the sort, and wished the victim turned every single one of them back.

In the end, Walter was found to be innocent after the team incarcerated Nellie Mortimer for Frank's murder. However, Walter was spoken to again about traces of moonshine found in his tavern. When informed that his distillery would be taken away, he got mad saying there was no point to bribing that other cop if it was going to be taken away anyway. Maddie was surprised to hear that he bribed a police officer, and since Walter refused to say who it was, they decided to search around the tavern again to discover who it was that he bribed. 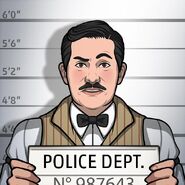 Retrieved from "https://criminalcasegame.fandom.com/wiki/Walter_Lombardi?oldid=520227"
Community content is available under CC-BY-SA unless otherwise noted.