Walter Fellows was the killer of socialite Lindsay Bannister in Murdertown (Case #34 of Pacific Bay).

Walter is a 60-year-old now-former bartender of the Ivywood Heights Hotel bar. He wears a typical bartender uniform which consists of a white apron over the combination of a white shirt with black vest and bowtie. It is known that Walter drinks gimlets, plays mahjong and smokes.

Walter found himself in trouble after the team of Frank and the player found Lindsay's luggage at the Ivywood Heights Hotel which contained cash addressed to him, but not without the player using the database matching software to confirm it was Walter. During the interrogation, Frank wanted to know how Walter knew Lindsay, to which the bartender replied that the now-deceased socialite used to spend a fortune on alcoholic drinks at record levels. Given Lindsay's death, Walter now felt that she was a daughter to him since the socialite would always tell him about her troubles. Not to mention, Lindsay had a solid smile in spite of being a drunkard.

Walter would be approached for a second time after Frank and the player found a pair of expensive earrings belonging to the late socialite in the hotel bar's ice bucket. All Walter knew about the earrings was that Lindsay gave him those as an apology for smashing the hotel bar one day. Lindsay stormed into the Ivywood Heights Hotel bar one day drunk, knocking tables, insulting customers, even smashing gimlets into mirrors, and due to the damage she inflicted, the socialite later had to give Walter a pair of expensive earrings to cover damages she did to the bar.

Behind Walter's friendly demeanor, however, was a dark side that slew the drunken socialite Lindsay Bannister, which was eventually uncovered at the climax of the murder investigation.

Amy and the player could not find Walter in the hotel bar as they went to arrest him. Instead, the duo found a riddle suggesting that the bartender was about to resist arrest, which infuriated Amy. Amy and the player immediately rushed to the Pacific Bay Airport, thus finally catching up with Walter.

In response, Walter stated that he attempted to resist arrest to get over his grief, to which Amy countered by presenting evidence against him. The bartender then assumed that the player arrested the wrong person, but Amy continued to lambaste him for Lindsay's death, grounds for Walter to finally admit to the crime.

All Lindsay wanted to talk about were her problems with her boyfriend Dick Shakespeare and her step-mother Velma Bannister, with Walter getting tired of hearing her problems day by day as he felt it was not fair that others could not hear his side of his story for at least once. Walter devised a plan to start a new life away from Ivywood, so he opted to help Lindsay fly out of Ivywood's reach; the socialite gave the bartender money and expensive earrings to look after. Walter knew that the face value of what Lindsay gave to him would be more than enough to start a new life, so he told the socialite to meet him at the movie set of Murder by Moonlight at her earliest convenience, but that was just half the battle.

Since Walter had to put up with Lindsay's problems day after day, he was lucky enough to know the individuals who hated her the most, so before he stabbed the socialite to death, he had to frame the people who hated Lindsay the most. The movie set would be the perfect scene to implicate Dick due to him being the star of Murder by Moonlight. Moreso, Walter implicated the victim's father, Hubert Bannister, by placing a death warrant with the Utopian symbol (with Hubert's signature) at the boardwalk, and made a simulated fortune teller with Lindsay's likeness in order to force the player to suspect Rico Damascus of murder. Walter also attempted to throw off the player in the process by making a phone call as an anonymous caller, but in spite of the tricks Walter played on the Pacific Bay Police, the player ultimately shipped the bartender to court to face trial.

In court, Walter stated before Judge Dante his disapproval of putting up with other people's problems after what he had to put up with serving Lindsay day after day. So, to conclude, Judge Dante simply gave Walter a 10-year jail sentence for not just Lindsay's murder, but for also deceiving the Pacific Bay Police, for not talking to the court about why he killed Lindsay, and for implicating three people of a crime they did not commit. 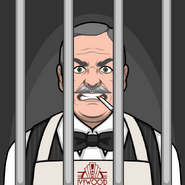 Walter, sentenced to 10 years in jail for the murder of Lindsay Bannister and for framing Dick Shakespeare, Rico Damascus, and Hubert Bannister. 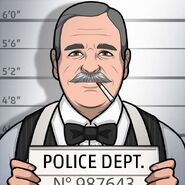 Retrieved from "https://criminalcasegame.fandom.com/wiki/Walter_Fellows?oldid=408985"
Community content is available under CC-BY-SA unless otherwise noted.