Walter Abernathy was a suspect in the murder investigation of guide Will Wyoming in Giving Up the Ghost (Case #26 of Mysteries of the Past).

Walter is a 19-year-old postman-turned-guide. He has short black hair and a pencil mustache. He wears a steel blue postman's cap and a steel blue coat over a brown and dark blue shirt. Additionally, he is seen with a brown satchel and holding a letter. It is known that Walter knows how to tie knots and eats cactus.

Walter became a suspect after he was seen at the crime scene, after he identified the victim as one Will Wyoming. He explained the victim was born and grew up in Devil's Ridge, but he had been away for some time. A few days ago Will returned, Walter remembered he stopped by the post office for some stamps and whatnot. As for why Devil's Ridge was abandoned, Walter said it happened weeks ago; he was delivering mail around Coyote Gorge, but when he returned to Devil's Ridge the whole town was empty. Considering the victim was recently there, Isaac and the player decided to look around the post office for more evidence.

Walter was spoken to again regarding an envelope full of cash the victim had his hands on. He explained that the victim had been going through other people's mail, like the one Isaac and the player found, he caught Will in the act doing so. It made him mad that he was going through other people's mail like that when they are not there to protect themselves, so he felt it was no surprised Will ended up getting himself killed.

Walter was found to be innocent after the team incarcerated Lucy Liang for Will's murder. But Maddie and the player needed a word with him in regards to deciphering an atlas to help Ennis Sparhawk and his group get to El Gordado. Walter was already having trouble as he got word his post office was being closed down, but when he heard about the situation he said he would be happy to. However, he lost his compass on the main street and he could not leave without it. They decided to search the main street and after finding it they went to see Ennis and informed him that Walter would come along and lead them to El Gordado. 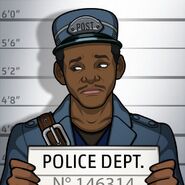 Retrieved from "https://criminalcasegame.fandom.com/wiki/Walter_Abernathy?oldid=527691"
Community content is available under CC-BY-SA unless otherwise noted.