Waldo Gigs was the killer of his father, iPear founder Paul Gigs, in Gone Pear-Shaped (Case #13 of The Conspiracy).

Waldo is the 24-year-old son of the victim. He is seen to have shoulder-length brown hair, brown eyes, and a brown mustache. He wears a forest green T-shirt that reads "Anti Social Club" in red letters, and a pair of brown suspenders. He also wears a brown tweed cap, a multicolored bead necklace, and a silver coin necklace. Additionally, he sports a pair of mustard-yellow glasses, several earrings, and has a rash on his neck. It is known that Waldo is a runner, has read User 404 and eats chia seeds.

Waldo became a suspect after Gloria and the player identified him from a photobooth strip as the victim's son. When informed of the murder, he was initially reluctant to believe them, but after accepting the claim, told them how much of a workaholic the victim was and expressed his disbelief over the murder.

Waldo was spoken to again about his birthday voucher, on which the victim had gotten his son's birthdate wrong. He revealed that he was used to his father's carelessness, but told them that it allowed him to discover his own interests.

In the end, however, Waldo was found guilty of Paul's murder. Admitting to the crime, Waldo said that after he had dropped out of college, his father had forced him to train for a job at iPear, stating that he needed to take over his legacy. Wanting the freedom to choose what he was to do in his life, Waldo had injected raccoon poison into a pear and left it in a fruit basket in the store for his father to eat. Judge Powell sentenced him to 15 years in prison. 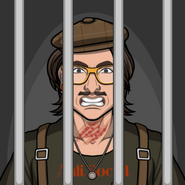 Waldo, sentenced to 15 years in prison for the murder of Paul Gigs. 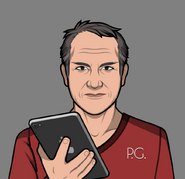 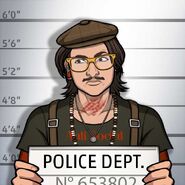 Retrieved from "https://criminalcasegame.fandom.com/wiki/Waldo_Gigs?oldid=479988"
Community content is available under CC-BY-SA unless otherwise noted.