Vizier Ibrahim (Arab: الوزير إبراهيم) was the victim in Pride Comes Before the Fall (Case #14 of Travel in Time).

Ibrahim was the vizier of the Ottoman Empire, serving Suleiman the Magnificent in 1515. He had long black hair and facial hair, and brown eyes. He wore a green turban with golden lines and feathers, as well as a ruby-and-pearl brooch. He wore a similarly-colored vest over a black shirt patterned with golden hexagons and golden buttons. He also wore a golden snake brooch with ruby eyes.

Ibrahim's body was found in the courtyard, impaled on Sultan Suleiman's statue after being hit in the head and being pushed off the balcony. Janis confirmed the victim's death by impalement and found traces of stuffed melon on his clothes, but none in his stomach. This allowed Janis to conclude that the killer ate stuffed melon.

In the library, Nebet and the player found a bloody vase. Theo discovered that the blood was the victim's, allowing him to confirm that the vase was used to hit the victim. He also found traces of rosewater that (per Janis) the victim lacked, which meant the killer used rosewater.

Ibrahim was one of the few Suleiman could trust. However, he betrayed him as he wanted to become the sultan in his stead, resulting in him planning to punish him. The Sultan's concubine, Roxelana was paranoid of the victim due to his trying to kill her as he thought that she had too much influence over the Sultan. To have her killed, he ordered his adopted daughter, warrior Serap, who unwillingly abided but failed twice. Ibrahim had also always sought to humiliate eunuch Beshir, resulting in them being in conflict.

The killer turned out to be Serap.

Serap admitted that she was having an affair with Roxelana. Feeling she had to follow her adoptive father's orders to kill her, Serap purposely failed to kill her, and pretended she had failed accidentally. Fearing that Ibrahim would discover Serap's lies and kill Roxelana himself, Serap pushed him over the balcony to kill him. Suleiman banished her from the Ottoman Empire for two years, but allowed Roxelana to bid her farewell. 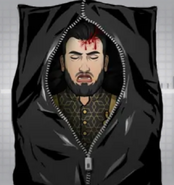 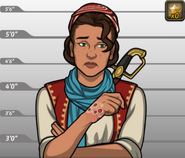 Serap, Ibrahim's adopted daughter and killer.
Add a photo to this gallery

Retrieved from "https://criminalcasegame.fandom.com/wiki/Vizier_Ibrahim?oldid=511133"
Community content is available under CC-BY-SA unless otherwise noted.