Vince Moon was a suspect in the murder investigation of former Grimsborough PD coroner Nathan Pandit in Snake in the Grass (Case #1 of The Conspiracy).

Vince is a 28-year-old zookeeper. He has chin-length red hair and a pencil mustache. He dons a beige collared shirt with a green neckerchief and badges. He also carries a lemur named Naboo on his shoulders. It is known that Vince can handle snakes and wears Eau de Wild.

While Jones and the player were talking about finding an escaped snake in the zoo candy store, Vince appeared and informed them that a snake was missing from its cage. When the team told him that the snake was used to kill someone, Vince said that the snake (named Bollo) was harmless. Furthermore, caretakers at the zoo and sneaky visitors could open its cage as well. When he was informed that Nathan was the victim, Vince cried and said that Nathan was the only who believed that he could really talk to animals through magic.

Later, the team found his "Down With Nathan" badge. Vince said that Nathan was an animal destroyer because he put down animals that were too weak. When the team told him that euthanizing animals was part of Nathan's job as a veterinarian, Vince said that was his excuse as well. Furthermore, because he believed that he could heal the animals with his magical powers, he said he would never forgive Nathan for killing the animals.

Vince was found innocent when Kit Partridge was found guilty of the murder. However, Vince talked to the team again after Kit's trial, saying that they needed to stop zoo owner Jackson Peacock from selling baby pandas. Because the team had found this fact out from Nathan's notes, they asked Vince for further proof. Vince said that he had heard Jackson talking about it in his office. Furthermore, he said that his lemur had caught him throw a phone into a box of plants in the terrarium. The team then left for the terrarium to find Vince's proof. 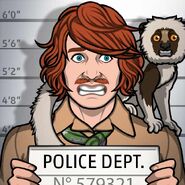 Retrieved from "https://criminalcasegame.fandom.com/wiki/Vince_Moon?oldid=467219"
Community content is available under CC-BY-SA unless otherwise noted.