Vicky was a senior of Fairview High School who was on the cheerleading team. She had shoulder-length black hair and brown eyes. At the time of her death, she wore a pale yellow shirt under a dark purple designer's jacket and a black skirt. She also wore black heels, a white pearl necklace, and a red Fairview High School badge. Vicky was known to have smoked cannabis on one occasion.

Vicky was found in Pippa Goldfinch's science classroom with strangulation marks around her neck and burn marks disfiguring her face. Upon Martine's examination, she deduced that the killer threw sulfuric acid at Vicky, highly corroding her face. The victim was then strangled from behind with a cord or rope of some sort. Furthermore, Martine found chewing gum stuck in Vicky's hair, coming to the conclusion that the killer had spat their gum out while strangling her. This led to her confirming that the killer chewed gum.

Later, Gloria and the player found a computer cable locked away in the science classroom's suggestion box left at the drive-in. Upon Rupert's analysis with Martine's confirmation, the computer cable was then filed as the murder weapon used to strangle Vicky. Rupert also found traces of a disinfectant solution on the cable surface, used to clean gold jewelry, notably earrings, which meant that the killer wore gold earrings.

Vicky had a trust fund set by her father, which her mother Dana Lopez initially was appointed to take care of the money, which later was given to her when she was 18. Dana did not want her daughter to be blowing her money on reckless purchases that she could have received if Vicky died. Vicky also rejected her best friend Chelsea Bloom's affections for her when Chelsea told her about her true feelings, saying that she loved her but "not like that". Vicky also had begged high schooler Julian Ramis to give her some weed because she was stressed out by her mother, however when she did not pay Julian, he stole her wallet. Vicky had also flaunted her knowledge by pointing out her science teacher Pippa Goldfinch's mistake and then making a thinly disguised insulting essay, angering Pippa. Vicky was also believed to be a bad influence to the Grim Badgers after she turned the cheerleaders into "fashion obsessed boy magnets", ruining Coach Kirk's football team.

The killer turned out to be Coach Kirk.

Upon admitting to the murder, Kirk said that Vicky had caught him checking the girls' shower room from time to time. He then told her not to tell anyone, but Vicky refused to stand down. When he talked to her in the classroom, Kirk got angry and threw sulfuric acid at Vicky's face. Realizing that she would testify against him for disfiguring her, he strangled her to death with a computer cable. Judge Powell sentenced him to 30 years in jail, not yet taking into account his actions against the cheerleaders. 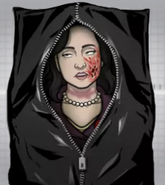 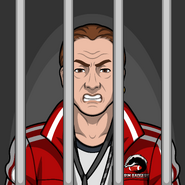 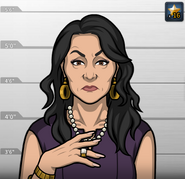 Dana Lopez, Vicky's mother.
Add a photo to this gallery

Retrieved from "https://criminalcasegame.fandom.com/wiki/Vicky_Lopez?oldid=459272"
Community content is available under CC-BY-SA unless otherwise noted.