In her first appearance, she wears a snow white sleeveless dress lined with crystals and a white fur boa, two crystal necklaces, two bracelets and a ring. She is shown to be holding a cigarette with her left hand. It is known that she is left-handed, drinks mint julep and has contact with horses.

In her second appearance, she dons an ink-stained light blue dress adorned with a white bow and a light blue fur boa, two crystal necklaces, two bracelets and a ring. She also wears a black hat with a white ribbon and a paisley design. Additionally, she is seen holding a cigarette. It is discovered that she eats sprinkle donuts, has read Components of Composition and uses smelling salts.

Verushka was spoken to after Isaac and the player found a candy heart with her name along with Jack's. She was distressed as she had only seen Jack recently when they informed her of his murder. She felt that he was different from all the other men there. She also said that the victim was "crazy in love" with her.

Verushka was spoken to again regarding her audition number in the newspaper clipping. She said that she wanted to be the face of Rochester's Chocolates and asked Jack to get her the role. She did not know that she had to audition for it and thought that she would automatically get it because of her looks. She was mad at Jack for expecting her to audition and so she did not attend.

Verushka was found to be innocent after the team incarcerated Violetta Blue for Jack's murder.

Verushka became a suspect again after Isaac and the player identified her as the victim's daughter. Initially thinking that they were joking when they told her that her mother had been killed, she burst into tears, claiming that her life was ruined. She said that with her mother dead, she wouldn't be able to attend any more writerly society parties, asking the player how her mother could do that to her.

Verushka was spoken to again about a recorded interview where the victim had insulted her. When asked about the interview, she revealed that her mother only ever thought about herself despite her attempts to fit in with society. She recalled a time when she had been mistaken for a waitress by a man at a party due to her mother's interfering. She then spent the rest of the party in the ladies' room out of embarrassment.

In the end, Verushka was proven to be Barbara's killer. Upon admitting to the murder, she complained that her mother always controlled her. When she thought of marrying her childhood friend, Callum Edwards (despite him not knowing about it yet), her mother said she was not allowed to marry until she was 25 years old. Angry, she pushed her mother out of the window of the Pistols & Petticoats office, killing her. Judge Takakura sentenced her to 25 years in prison. 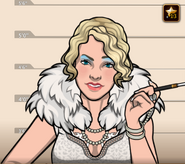 Verushka, as she appeared in Sweet Revenge (Case #9 of Mysteries of the Past). 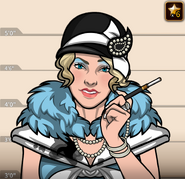 Verushka, as she appeared in A Study in Pink (Case #52 of Mysteries of the Past). 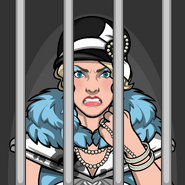 Verushka, sentenced to 25 years in prison for the murder of Barbara Coldwell. 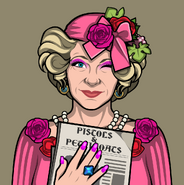 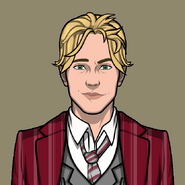 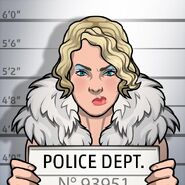 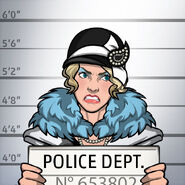 Retrieved from "https://criminalcasegame.fandom.com/wiki/Verushka_Coldwell?oldid=415342"
Community content is available under CC-BY-SA unless otherwise noted.