Veronica Salter (real name Katherine Vojtka) was the killer of media mogul Rufus Murlock in Six Feet Down Under (Case #35 of World Edition).

Veronica is the 22-year-old assistant to Rufus. She has long, ombre brown hair adorned with a desert rose. She wears a gray dress, a necklace, a ring and a bandage wrapped around her right arm due to a gunshot wound. She also wears green contact lenses to cover her yellow eyes which were caused by SOMBRA's experiments on her and carries a Pearphone. It is known that Veronica eats veggiemite, drinks Shiraz and scuba dives.

Veronica was first interrogated when she brought Carmen and the player to the body. She was shocked at Rufus' murder considering he was alive not very long beforehand. When Carmen asked what happened, Veronica explained the victim went outside for a phone call and she came with him to take notes. Then all of a sudden, she felt a sharp pain in her arm and was knocked over the head. By the time she woke up, she found Rufus lying on the ground dead; but considering how fast it happened she did not know who it was.

Veronica was interrogated again after her phone was found in a shipwreck on the victim's property. She explained that her boss was hiding some sort of secret and she wanted to find out what it was. When she tried to ask him straight up, he just clammed up, so she decided to look. Veronica felt she needed to know everything she could so she could assist her boss with his duties.

At the climax of the investigation, it was revealed that Veronica was responsible for Rufus' murder. During the arrest, Veronica revealed that she was a SOMBRA recruit. She said that she was in Australia for months awaiting SOMBRA's orders. When the order to kill Rufus came, she shot Rufus six times with a pistol and then shot herself in the arm to avoid suspicion. Refusing to say anything else, Veronica was tried and sentenced by Judge Adaku to 35 years in prison.

After her trial, Marina and the player decided to find out more about her to obtain information on SOMBRA. They found her rosary which Elliot used to find out that Veronica was actually a Slovak orphan named Katherine Vojtka. Veronica said that she was abused in the orphanage and SOMBRA made her strong, fearless, and powerful after she escaped; hence, she refused to break her allegiance to SOMBRA. 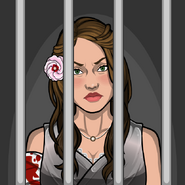 Veronica, sentenced to 35 years in jail for the murder of Rufus Murlock and for conspiring with a terrorist organization. 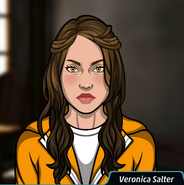 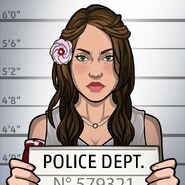 Retrieved from "https://criminalcasegame.fandom.com/wiki/Veronica_Salter?oldid=409249"
Community content is available under CC-BY-SA unless otherwise noted.