Velma Bannister was a suspect in the murder investigation of her stepdaughter, socialite Lindsay Bannister, in Murdertown (Case #34 of Pacific Bay) and the killer of film producer Tyler Snakes in Dead Carpet (Case #38 of Pacific Bay).

Velma is a 27-year-old femme fatale. She has blue eyes and long blonde hair, with one side lying over her right shoulder. She dons red nail polish and lipstick and holds a cigarette holder in her right hand.

In her first appearance, Velma wears a pair of small pearl earrings. She dons a white formal strapless dress accompanied by the badge of an infamous cult on the left. It is known that Velma drinks gimlets, plays mahjong and smokes.

In her second appearance, Velma brings a bit of changes to her attire: she replaces her white dress and earrings with a fancy, gold-and-black-colored dress and earrings, respectively. Additionally, she sports a gold necklace, with a flying bird depicted in the middle. She also sports black eyeshadow. It is discovered that she has seen A Puff of Death, takes Nevrax and is a Capricorn.

Inside the bar of the Ivywood Heights Hotel, the investigation team of Frank and the player found a perfume bottle bearing an insulting note – by victim Lindsay Bannister – to a certain Velma. Since the team could not figure who the message was addressed to, the piece of evidence had to be shipped to tech expert Hannah for digital analysis, much to her displeasure of analyzing perfume bottles. Hannah managed to identify the "Velma" to be Velma Bannister – grounds for Frank and the player to call her in for an interrogation.

Drooling over Velma's beauty, Frank assumed that she was an actress for the movie Murder by Moonlight and asked her if the victim came to see her on its set (given that Lindsay was found murdered there). Velma responded that she was not going to play in Murder by Moonlight, before making it clear that she was practically the same age as the victim – one of the reasons why Lindsay could not handle Velma as her step-mother. After the interrogation, Frank started to feel a sense of infatuation for the femme fatale.

Frank caused a fiasco in the Pacific Bay Police Department by leaving a note on his desk, saying that he opted to step down from the police ranks in order to pursue a romance with Velma. An infuriated Chief Marquez was then forced to call Amy back to duty to augment the player as the Chief was abhorrent of Velma. After doing a quick recap of the investigation, Amy and the player headed to the Ivywood Boardwalk for clues.

At the boardwalk, Frank – accompanied by Velma – stumbled upon Amy and the player, causing Amy to lambaste the senior detective for abandoning the player in the middle of a murder investigation. Amy and the player then dragged Velma to the police station for the sake of formality, much to Frank's disapproval.

Amy questioned Velma as to why she seduced Frank, but the femme fatale refused to answer honestly; however, when Amy informed her that Frank resigned from the police force to pursue a romance with her, Velma got furious as she realized that Frank could not protect her from the police anymore – even going far by calling him a "brain-dead halfwit" in the process. This proved that Velma seduced Frank just because she wanted to protect herself from the murder investigation.

Although Velma had a suspicious relationship with the victim, she was eventually proven innocent after Walter Fellows's indictment.

Following the case's closure, Frank would redeem himself from Velma's games when he helped the player incarcerate the femme fatale for seducing Rico Damascus into stealing an expensive diamond for her. During the moment of her arrest, Velma attempted to seduce Frank once again but failed as the latter made it clear that she was about to follow Rico into jail. Moments after Velma was impounded, however, she was released on bail by her husband Hubert Bannister.

With the annual Ivywood Film Awards scheduled to get under way in just hours, the inquiring team of Amy and the player found a seductive photo of Velma (on the red carpet outside the Ivywood Awards Theater) near the corpse of movie producer Tyler Snakes, bearing a message forensically dusted as: "Tyler, I want to walk the red carpet with you". This piece of evidence led the femme fatale to be flagged as a murder suspect once again. During the interrogation, Velma – although she did not sound very upset – stated that she truly admired Tyler, for his power and charisma, also citing that it was better to have loved and lost someone than having to train her husband "not to leave the toilet seat up." The femme fatale then walked away in a hurry before concluding that she had to rehearse her acceptance speech for the night's Ivywood Awards.

After Amy was shockingly found in a brainwashed state (which incapacitated her for the remainder of the investigation), profiler Russell opted to take a stand to help the player out. Russell and the player soon managed to find a card addressed to Frank, with the player forensically dusting it to reveal a note written by Velma – who needed Frank's shoulders to cry on. Drama then happened in the precinct as Frank informed Russell and the player that Velma had threatened to swallow a gross amount of Nevrax pills if he abstained from seeing her since Tyler had scorned the femme fatale. This angered Russell as he did not expect Frank to withhold such information, that too during a murder investigation, but the senior detective defended himself by stating that Velma sounded genuinely upset and that nobody had ever treated her like Tyler did.

Believing Frank's story, Russell and the player proceeded to have a talk with the femme fatale. During a detailed conversation, Velma gave voice to the fact that she was heartbroken after having a heated argument with Tyler due to him refusing to have her as his red carpet date – which would later prompt Velma to call Frank. Russell refused to believe that Velma took the rejection so seriously, to which the femme fatale replied that she had reached breaking point after Tyler called her old and said that she was not beautiful enough to be his date. Also, taking the producer's words to heart, Velma had to spend an entire night watching A Puff of Death while sobbing like a "neurotic housewife" – though she believed that, as a femme fatale, she should be the one rejecting men at the end.

At the climax of an investigation full of twists and turns, Russell and the player managed to incriminate Velma as the one who poisoned Tyler. During the moment of her arrest, Velma offered a smoke to the player as a condition to have her rights read while she waited for her husband's lawyers to arrive. In a smart move, Russell then asked the femme fatale to refrain from smoking – especially with poisoned cigarettes, like the ones she had given to Tyler. Velma then proceeded to state that the police had nothing against her – but Russell continued his manipulative demeanor, pointing out that everyone admired Velma's persistence, unlike Tyler, who had the guts to reject her and bruise her ego immensely. This striking insult by the profiler pushed Velma to the limit, causing her to finally admit that she was indeed responsible for Tyler's death – though her actual motive was to gain access to the TV room of the Awards Theater.

Velma believed she could "save" Ivywood from the Utopians' brainwashing plan – which was to brainwash millions of viewers watching the live broadcast of the Ivywood Awards, by simply replacing the original tape with that of a certain brainwashing film – even though she knew this would contradict what her cult desired: she wanted to use her own recording (which would brainwash viewers into obeying and worshiping her) instead of the intended one the Utopians wanted (which would brainwash viewers into obeying the cult). However, Tyler was in charge of broadcasting the Awards ceremony and Velma needed access to the TV room by any means necessary in order to replace the Utopians' tape with hers, leaving her with no choice but to take him out of her way. As the statement came to an end, Russell and the player shipped the femme fatale to trial.

In court Velma cited the fact that she had to use her charm all her life to seduce people to get what she wanted, and the older she became, the more difficult it got, as she believed that there was always going to be someone younger and more beautiful than herself, with Tyler making her realize that her powers were slowly fading with age. However, Velma refused to be uglier than someone else, so she ultimately decided to take the Utopians' brainwashing plan to her own hands by poisoning Tyler to death, replacing the Utopian-standard brainwashing tape with a brainwashing tape of her own so that people would have to obey her and also worship her as the most beautiful woman in Ivywood – and to love her forever. Fame was what Velma yearned for, although she knew that the brainwashing effect could be nullified by a cure and that her fame would not last forever. Hearing enough, Judge Dante finally sentenced the femme fatale to 18 years of hard time for the premeditated murder of Tyler Snakes, not to mention forcing the Judge and the court members to miss out on the Awards ceremony. 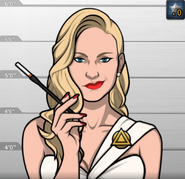 Velma, as she appeared in Murdertown (Case #34 of Pacific Bay). 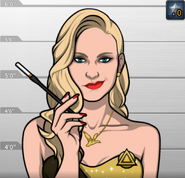 Velma, as she appeared in Dead Carpet (Case #38 of Pacific Bay). 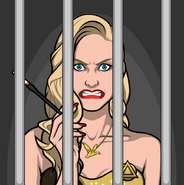 Velma, sentenced to 18 years in jail for the premeditated poisoning of Tyler Snakes. 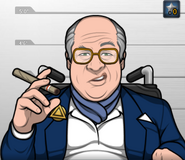 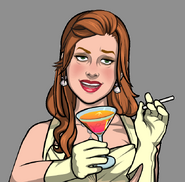 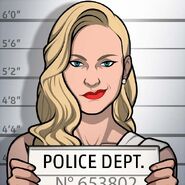 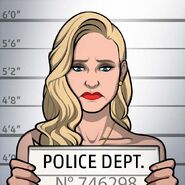 Retrieved from "https://criminalcasegame.fandom.com/wiki/Velma_Bannister?oldid=430179"
Community content is available under CC-BY-SA unless otherwise noted.