Vanessa Carter was a suspect in the murder investigation of her daughter, teenager Jennifer Carter, in The Grim Butcher (Case #3 of Grimsborough).

Vanessa is a 42-year-old blonde woman who wears a gray vest and a black cardigan. It is known that Vanessa's feet measure 9.5 inches and she is a smoker.

Vanessa was the mother of Jennifer Carter, who was found murdered in a meat butchery house.

Vanessa was spoken to after Ramirez told the player and Jones that she was ready to see them. She was shocked of her daughter's death and told them that the victim was seeing out a boy in Cooperville. Which led the team to go to Cooperville.

Vanessa was spoken to again after she went to Jones and the player to tell them somebody sold her Jennifer's heart. After they investigated her home, they found the victim's heart which led them to finding Trish Colletti guilty for the murder.

She was seen again later because she wanted to bury Jennifer's baptism token in her grave but lost it. When the player succeeded to repair it, she said she did not know if it was Jennifer's one or her unknown elder daughter's because the birth date was not legible. Vanessa was very thankful the team were able to decode Jennifer's date of birth following the player's code cracking antics. 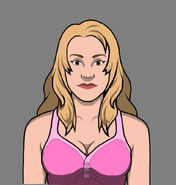 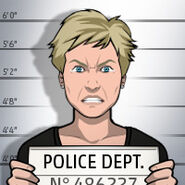 Retrieved from "https://criminalcasegame.fandom.com/wiki/Vanessa_Carter?oldid=445274"
Community content is available under CC-BY-SA unless otherwise noted.