Valentine Montgomery was the killer of young woman Daisy Thompson in The Last Supper (Case #17 of Grimsborough).

Valentine is a 45-year-old chef and owner of Chez Valentine with black hair which is mostly covered by a chef hat that she wears. She has blue eyes and wears a white chef coat. It is known that Valentine cooks, uses detergent and wears nail hardener.

During the investigation of the case, Valentine and food critic Tobias Sharp were discovered to have attended cooking school together. When asked about this, Tobias told Jones and the player that he had more talent than Valentine in cooking, but she had the money, and just because of that, Valentine ended up with her own restaurant and he ended up as a food critic. For this reason, Tobias strongly disliked Valentine, even writing an inflammatory critic about her restaurant.

Valentine was eventually revealed to be Daisy's killer. Sick of Tobias continuously criticizing her restaurant, Valentine intended to poison the food critic, but the waiter accidentally got the plate to the wrong table, poisoning Daisy instead. 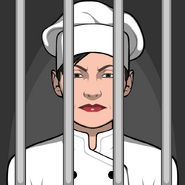 Valentine, sentenced to 10 years in jail for the poisoning of Daisy Thompson. 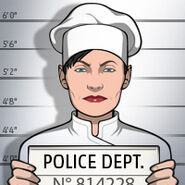 Retrieved from "https://criminalcasegame.fandom.com/wiki/Valentine_Montgomery?oldid=499344"
Community content is available under CC-BY-SA unless otherwise noted.