Vadim is a 35-year-old MGB agent undercover as a mammoth scholar. He has brown hair and a thick beard. He is seen wearing a gray jacket with red accents underneath a gray scarf and a fur cap with a mammoth pin on his head.

In his first appearance, it is known that Vadim smokes cigarettes and eats pelmeni.

In his second appearance, he has a bruise on his right cheek. It is discovered that he is a trained fighter.

Vadim became a suspect after the player and Carmen found his trowel and analyzed the mammoth bone dust on it. When informed of Ilya Tretakov's murder, he said he did not know who he was, and did not care if he was not a mammoth. Carmen exclaimed the importance of this murder, but Vadim still insisted he cared more about mammoths. Though Carmen asked if he noticed the diamonds in the cave or not due to his focus on mammoths, she immediately retracted the question.

Vadim appeared again to save Carmen and the player from a bear that was about to attack them. Though he was scratched on the face, he insisted he was alright. He was interrogated regarding him on a magazine cover saying he spoke out against the victim. He explained that Ilya's company destroyed a mammoth excavation site, which angered the mammoth expert to no end. It stressed him out to no end, thinking about the mammoths whose story would never be heard.

Vadim was found to be innocent after the team incarcerated Nikita Rukhin for Ilya's murder.

Vadim became a suspect again after the player and Carmen found his DNA on an energy bar wrapper at the crime scene. He was mostly there for the polar bears, not caring about the satellite crash or the murder that occurred. He was worried that the blood from the victim would attract them, and was scared since he claimed they were so fierce. However, Vadim said he never saw any humans nearby, and if he did he would have advised them to run away.

Vadim was spoken to again regarding his orders from the MGB to report on the progress of Operation Silent Frog. He confirmed he was an MGB agent, even back when they met in Siberia, he just felt he had no reason to say anything. When asked about the orders he was given, he said they were to follow him, not even being told why. He did follow them, but he lost them when he got distracted by two polar bear cubs, which meant he never saw what happened to Jean or Asal.

Vadim was found to be innocent again after the team incarcerated Anya Ivanova for Jean's murder and Asal's attempted murder. But he later showed up at the station, offering his assistance in finding the satellite's hard drive. Though Carmen had her doubts, she was fine with it, so the player and Vadim searched the interior of the satellite once again. They ended up finding a metal plaque, which when restored, said it could withstand temperatures up to -270.45 Celsius. That meant it was durable enough to survive the cold temperatures of space. Suddenly, CIA agent Forrest Hunt appeared, saying he had more information to pass on to the player after overhearing their conversation. Vadim decided they should return back to The Bureau, where they both passed their information to the player and Carmen. 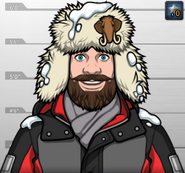 Vadim, as he appeared in Fast Track to Murder (Case #16 of World Edition). 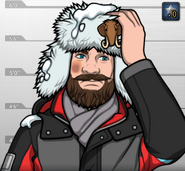 Vadim, as he appeared in Operation Spyfall (Case #54 of World Edition). 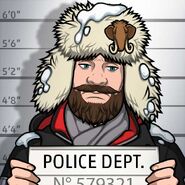 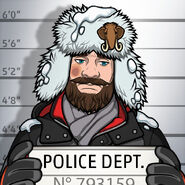 Retrieved from "https://criminalcasegame.fandom.com/wiki/Vadim_Efremov?oldid=442550"
Community content is available under CC-BY-SA unless otherwise noted.