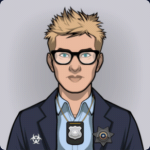 “No matter if those supernatural creatures we've seen are real or fake, but all the criminals who used them to commit a chaos for their own benefit have to be punished.”
―Spencer Goldenbright speaking to other Criminal Case Wiki users

Supachai Thongsawang, also known as Spencer Goldenbright, is a Criminal Case player who started playing this game since 2012, then he stopped playing in 2016 before continued his career again in 2017.

Play Efficiency Runs Low
Recently, the performance efficiency of my phone used for playing Criminal Case, is now running low, especially on battery. Thus, i will take more time than usual to solve the whole last released case. I hereby declare that i will take every efforts to get my new phone as soon as possible. However, i will still meet the wiki users in every week.

Let's solve all the supernatural problems together.

Supachai is a 23-year-old mathematics student. He also has a concurrent career by being a time travel investigator in Criminal Case universe. He has short blonde hair and blue eyes. He wears a sky blue shirt, a navy blue lab coat, a black nerd glasses, a police badge necklace, and a black police brooch.

As his appearance in the Criminal Case universe, it is revealed that he is left-handed, drinks lemon tea, eats onion rings, has a knowledge of cryptography, and plays Detonating Puppies.

<<<The current case is now in progress of investigation.>>>

Season 4: Mysteries of the Past

Retrieved from "https://criminalcasegame.fandom.com/wiki/User:Spencer_Goldenbright?oldid=521834"
Community content is available under CC-BY-SA unless otherwise noted.