Governor Uriah Haddonfield was a suspect in the murder investigations of gunner Barnabas Dycker in Anchors Aweigh! (Case #21 of Travel in Time) and auctioneer Henri Pelletier in Going Once, Going Twice, Dead! (Case #25 of Travel in Time).

Uriah is a 52-year-old governor and the head of East India Company. He wears a white powdered wig and has wrinkles. He wears a red jacket with gold patterned lining over a red waistcoat with gold lining and matching buttons. Additionally, he sports a white ruffled ascot.

In his first appearance, it is known that Uriah has scurvy and collects butterflies.

In his second appearance, he sports an ink stain on the left side of his jacket.

After Jack informed the team that the victim had been at a party at the Governor's plantation house, Zara and the player headed there to investigate the scene. There, Uriah encountered the team and informed them that his collection of rare exotic butterflies had escaped.

Uriah became a suspect after Zara and the player recovered his butterflies. As thanks, he told the team about his party. He branded the victim as a "nincompoop" and revealed that Barnabas had drank a lot of champagne, subsequently making a fool of himself by the end of the night. Zara then told him about the murder, surprising Uriah and making him realize that the HMS Highmore would be searching for a replacement gunner.

Uriah was spoken to again about his interdiction. When Zara asked him who he had expelled, he told them that it was the victim. He revealed that he had overheard Captain Shadrach and surgeon Felix Humphrey talking about the victim romancing a girl. From their descriptions, he realized that the girl in question was his daughter, Isadora Haddonfield. Outraged, he wrote the decree to prevent the victim from coming to the port ever again.

Uriah was found to be innocent after the team incarcerated Felix Humphrey for Barnabas' murder. Later, Jack and the player asked Uriah about the Egyptian Trading Company. He revealed that the company had been seeking a foothold and was hoping to acquire more ports and plantations at the auction. Jack asked for more details about the auction. Since Uriah did not know when it would be held, he prompted the team to search for an auction notice in the veranda.

After Orlando informed the team that they needed to join a ship in order to travel in the Age of Sail, Jack and the player asked Uriah about joining an East India Company ship. He suggested that they spoke to Captain Shadrach as he was preparing to depart. He then wished the team good luck.

Uriah became a suspect again after Jack and the player found his powdered wig in the victim's bedchamber. After being informed about the murder, he suggested that his wig was in the victim's room because the porter sent it to the wrong place. He then claimed to see nothing out of the ordinary.

Uriah was spoken to again about his relationship with the victim at secondary school. He revealed that the victim used to mercilessly bully him and was tormented with the nickname "Urine Hat". He explained that Pelletier even tried to make him look like a fool before the French King.

Uriah was found to be innocent again after the team incarcerated Simone Severine for Pelletier's murder. After the arrest, he informed them about a strange Egyptian messing with the auction candle, proceeding to inform the team how the candle auction would work. He then requested that the team spoke with his daughter as she was in a state.

After the team undid Ammon's sabotage of the auction candle, Jack and the player told Uriah that the auction could go forward as planned. Uriah thanked the team and proceeded to prepare for the auction. 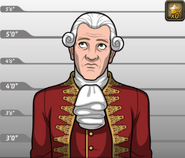 Uriah, as he appeared in Anchors Aweigh! (Case #21 of Travel in Time). 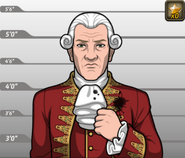 Uriah, as he appeared in Going Once, Going Twice, Dead! (Case #25 of Travel in Time). 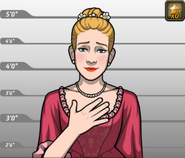 Isadora Haddonfield, Uriah's daughter.
Add a photo to this gallery

Retrieved from "https://criminalcasegame.fandom.com/wiki/Uriah_Haddonfield?oldid=536229"
Community content is available under CC-BY-SA unless otherwise noted.