Tyler Schultz was a suspect in the murder investigation of housewife Elaine Seabrook in Hell Is Other People (Case #2 of The Conspiracy).

Tyler is an 18-year-old waiter at Fairview Steak House. He has green eyes with long brown hair. He has several pimples and freckles on his face, and wears an orange-collared shirt with a black apron. On the apron is the Steak House logo and a nametag with "Tyler" on it.

Tyler was first spoken to when Gloria and the player found out that he was the waiter who last served Elaine at the steak house. Tyler provided an alibi, saying that he was at school all day and went straight to the restaurant for his shift. As for Elaine, Tyler expressed confusion at why she preferred her usual order of a veggie salad over steak.

Later, the team found a motel key, which was later revealed to be Tyler's invitation to Elaine to a motel. Tyler said that he had spent all his week's wages on the motel room, only for Elaine to turn him down and laugh at him. He expressed frustration about the fact that she rejected him, knowing that she had slept with many people in the neighborhood already.

Tyler was found to be innocent when Cynthia Lane was found guilty of Elaine's murder. Later, Gloria and the player talked to him again about the man who had died in the steak house. Tyler identified him as David O'Connell, his friend's dad. He said that he was going through a divorce and was getting depressed over the custody battle for their children. Feeling bad for David, Tyler offered him a cola on the house but turned it down in favor of his own can of Rocket Cow. Knowing that David had to drink something that would increase the potency of the drug that killed him, the team asked where the can was. Tyler said that he had thrown it in the trash and told the team to feel free to look for it. 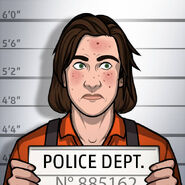 Retrieved from "https://criminalcasegame.fandom.com/wiki/Tyler_Schultz?oldid=476943"
Community content is available under CC-BY-SA unless otherwise noted.