Twinkles the Clown was a suspect in the murder investigation of knife-thrower Lynn Hart in Turn for the Worse (Case #46 of Mysteries of the Past).

Twinkles is a 32-year-old clown. He has red hair styled with two points and wears red and white clown makeup. He dons a ruffles cream suit with red and cyan lining and a red rose. Additionally, he wears white gloves and is seen holding a multi-colored ball. It is known that Twinkles eats popcorn, suffers from headaches and likes the shooting gallery.

Twinkles became a suspect after the player and Isaac found his prop gun at the crime scene. He was surprised to hear of Lynn's murder, saying that they were friends, and he admired Lynn's knife throwing talent. But he warned her about throwing sharp things around like that, otherwise she would get cut one day.

Twinkles was spoken to again about a box of chocolates she sent to the victim. He confirmed he had fallen in love with the victim, saying she was a beautiful woman in every sense of the word. But Lynn would not even look at him, not that Twinkles would blame her, given his role in the carnival. Though he was angry at first, he just ended up feeling sad about the whole thing.

Twinkles was later found innocent after the team incarcerated Mysteria for Lynn's murder. 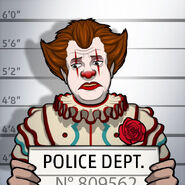 Retrieved from "https://criminalcasegame.fandom.com/wiki/Twinkles_the_Clown?oldid=415431"
Community content is available under CC-BY-SA unless otherwise noted.