Tucker Smalls was the killer of actress Felicia Steppingstone in The Young and the Lifeless (Case #31 of Pacific Bay).

Tucker is a 27-year-old now-former understudy. He is seen wearing a blue star-patterned necktie underneath a plaid pink shirt and a navy blue jacket, and dons brown spectacles and a silver earring. He is often seen carrying a bunch of papers that are clipped together. He also owns a chihuahua that he usually carries around and wears a phone earpiece. It is known that Tucker drinks protein shakes, drives a convertible and uses teeth whitener.

Tucker found himself in trouble after Frank and the player found Felicia's beauty box with Tucker's driver's license inside. Tucker told the team that part of his job as Felicia's assistant was to run errands for the late which caused him to lose track at times and to barely have any breaks in between tasks given the amount of work Felicia gave her assistant. Since Felicia was the one who was going to help Tucker initiate a path to stardom, and without her in the world, Tucker knew that the road to stardom would be nigh impossible, but was confident that he'd find another way to stardom.

Tucker was brought into questioning a second time after the player found a prison photo with a message—"You will pay for this, Felicia!"—written on his mugshot. Tucker did not like it when the police team showed him his mugshot, but Frank wanted to discuss about the hard time Tucker had to serve previously per the mugshot. Tucker was talking gibberish but Frank told him to get to the point as to why he wrote that message on the mugshot. Tucker wanted to shine in the pool party but Felicia told him that she forgot her purse, ordering Tucker to retrieve it for her. Furthermore, Tucker got pulled over for speeding because he was operating a motor vehicle without a driver's license (given it was inside Felicia's box at the time of the speeding offense), so the cops impounded him—a time Tucker could've used to sign for a movie deal instead. Both the missing driver's license and the mugshot with Tucker's angry message proved to be strong evidence against him as those attributes eventually incriminated him as the killer.

Tucker attempted to persuade Frank and the player that he had nothing to do with Felicia's death, but when Frank informed him that evidence incriminated him as the killer, he snapped by telling the team to keep his beloved chihuahua out of the murder. The player then shipped Tucker to trial so that he could explain his reasons for the murder before Judge Dante.

Tucker told the court that Felicia ruined his life, and in spite of him working as the actress's assistant, she treated Tucker as if he was her slave. Tucker was forced to do errands and chores for the actress and sometimes he would get yelled at by Felicia if he did something wrong. Felicia promised Tucker that she would introduce him to some of her agents so that he would be as famous as her, but Tucker saw her as a liar, making it clear that the actress abused him.

Judge Dante informed Tucker that he was arrested previously for cocaine possession albeit Frank was aghast to know that Tucker did not mention narcotics during the murder investigation. According to Judge Dante, Tucker was pulled over the night before he offed Felicia for speeding with no driver's license, in which street patrollers found narcotics in the car's trunk. The narcotics were Felicia's, which Tucker was forced to grab for her during transit, but the street patrollers assumed the narcotics to be his property, and because of this Tucker was faced with a criminal record that would prevent him from becoming a celebrity in his own right. Tucker wanted revenge, so he followed Felicia until he boxed her to the Ivywood sign and, upon cornering the actress, slashed her with razor blades—thus tying her to the sign to make the public aware of her monstrosity. Judge Dante made things clear that there is no excuse to murder, so he gave Tucker a 20-year jail sentence for the murder of Felicia Steppingstone. 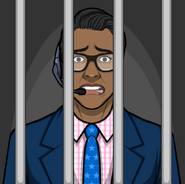 Tucker, sentenced to 20 years in jail for the murder of Felicia Steppingstone. 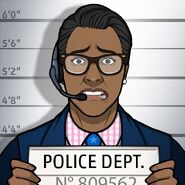 Retrieved from "https://criminalcasegame.fandom.com/wiki/Tucker_Smalls?oldid=472349"
Community content is available under CC-BY-SA unless otherwise noted.