Trudy is a 46-year-old lawyer. She has short blonde hair and a beauty spot above her lip. She wears a white wrap-around top and a black skirt with a large black belt. She is seen holding a cigarette holder in her left hand. Additionally, she wears small, gold hoop earrings and a silver necklace. She also sports dark red nail polish.

In her first appearance, it is known that Trudy drinks Bendrick's gin, uses Crème de la Terre and has manicures.

In her third appearance, Trudy is seen wearing a dark blue scarf. It is discovered that she is a sharpshooter, is allergic to shellfish and reads Modern Hunter magazine.

Trudy became a suspect after Jones and the player discovered that she had sponsored a bench in the victim's memory. After being informed of the murder, she told them that while she knew that someone would eventually tell her that Stella was dead, she had hoped that she would return one day. She told Jones and the player that the victim was a rising star in the legal world and offered them any legal help that they required.

Trudy was spoken to again about the victim making partner at their law firm. She told them that she was irritated that an "opportunistic whippersnapper" had sneaked her and taken the role as partner, but she had made partner a few months later. When Jones suggested that the victim's disappearance and Trudy making partner could be connected, she threatened to sue him for defamation.

Trudy was found to be innocent after the team incarcerated Guadalupe del Prado for Stella's murder. However, she was later questioned about a case that the victim was working on that had resulted in her being killed. After making her displeasure at being a suspect in the murder clear, she told them that the victim was working on a case that was code-named "Salvador Bali", after a Spanish surrealist painter. After finding evidence that Stella was killed for building up a case against her killer's father, Pablo del Prado, an infamous Luzaguayan drug baron, Gloria and the player gave the files to her so that she could prosecute him.

Trudy became a suspect again after Gloria and the player learned that she was the victim's lawyer. She revealed that Louis had been referred to her by Christian Bateman, another one of her clients and a member of Ad Astra. She then told the team that Louis had been naturally unhappy about being incarcerated, but never said that he felt unsafe.

Trudy was spoken to again about the victim blackmailing her. She informed the team that Louis wanted her to forge a court order to get him out of prison as quickly as possible. Impatient with her slow progress, he threatened to target her family, pressuring Trudy to choose between her job and her family.

Trudy was found to be innocent again after the team incarcerated Shweta Noorani for Louis' murder.

Trudy became a suspect for the third time after Jones and the player learned that she had forged a passport for the victim. Upon being informed that Christian had been killed, she admitted that he had asked her to procure forged passports for him and the rest of Ad Astra. Initially refusing, she accepted a bribe from him and agreed to get them the passports. Trudy was then taken into custody.

Trudy was spoken to again about her connection to S.A.R.A. head Denise Daniels, who was targeting Ad Astra. She told the team that she had been anonymously contacted by a high-up person from S.A.R.A., but did not know who it was. She had been asked to act against Ad Astra and was offered a handsome bribe as an incentive. However, she rejected the offer due to her loyalty to her clients.

Trudy was found to be innocent for the third time after the team incarcerated Joe Warren for Christian's murder. 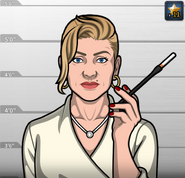 Trudy, as she appeared in Stonewalled (Case #8 of The Conspiracy). 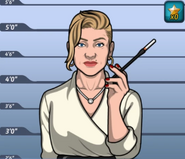 Trudy, as she appeared in Breaking News (Case #54 of The Conspiracy). 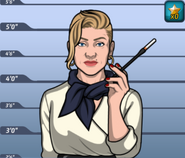 Trudy, as she appeared in Reap What You Sow (Case #57 of The Conspriacy). 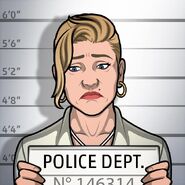 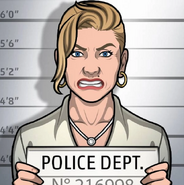 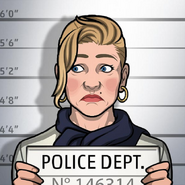 Retrieved from "https://criminalcasegame.fandom.com/wiki/Trudy_Lively?oldid=535256"
Community content is available under CC-BY-SA unless otherwise noted.