Trishna Joshi (Hin: तृष्णा जोशी; 1982–2019) was a suspect in the murder investigation of dome canteen employee Doris Black in Out of Breath (Case #51 of The Conspiracy) before being murdered in To Eternity and Beyond (Case #56 of The Conspiracy).

Trishna was a 37-year-old HAZMAT specialist of Indian-American heritage. She had long black hair tied in a plait, pushed back with a green bandana, and sported small pearl earrings. She wore a standard orange HAZMAT suit underneath a black T-shirt and black gloves and was seen holding her HAZMAT helmet. It is known that Trishna ate sunflower seeds, was an amateur pilot and took probiotics.

At the time of her death, Trishna ditched her bandana and let her hair down.

Trishna became a suspect after she accidentally sprayed Jones with water. After being told about the murder, she told the team that Doris often served them tacos for lunch. Trishna then said that the HAZMAT team would miss her food.

Trishna was spoken to again about her taking the victim's tip jar. She explained that she had lent Doris some money to help her stay afloat during Doris's transition from DreamLife to S.A.R.A., but had never been paid back. As such, she took the tip jar to pay part of the loan back.

Trishna was found to be innocent after the team incarcerated Clyde Black for Doris's murder.

Trishna's body was found stabbed in the neck in the S.A.R.A. headquarters. Martine ascertained that Trishna would have bled out from her stab wound in two to three minutes. She also determined that the killer spat in her face. While there was not enough saliva to establish a DNA profile, she identified Rocket Cow in the spit. This led Martine to conclude that the killer drank Rocket Cow.

At the training facility, Gloria and the player found a blood-stained letter opener. Amir identified the letter opener as the murder weapon as the blood belonged to Trishna. Amir also found traces of engine lubricant for LegAways on the handle, allowing him to conclude that the killer rode a LegAway. Moreover, Ramirez traced the letter opener back to S.A.R.A. head Denise Daniels.

According to S.A.R.A. Chief of Staff Christine Ramsgate, Trishna was generally nice with everyone. However, Christine was annoyed with Trishna as she had accidentally sprayed chemicals all over her that ruined her Ramani jacket. Retired astronaut John C. Birk also disliked Trishna as he had found her too disrespectful, disobedient, and stubborn ever since she worked for him to decontaminate the equipment he returned from his final missions. Trishna often mocked Otto Kessel for his job as a personal assistant to Denise, calling him a servant and a robot. Lawyer Martin Davenport had a crush on Trishna, but she rejected his advances.

The killer turned out to be Birk.

Upon admitting to the murder, Birk said that Trishna had failed to sanitize the storage chamber on his spaceship on what turned out to be his final space flight, thus contaminating all his samples. The higher-ups blamed Birk for the oversight, however, and kept him grounded. When Birk saw Trishna in S.A.R.A. the day he was going to give a guest lecture, he could not contain his anger and so he stabbed her in the neck with a letter opener after he delivered his lecture. Judge Powell sentenced him to 15 years in prison. 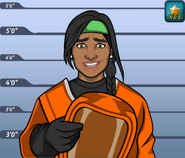 Trishna, as she appeared in Out of Breath (Case #51 of The Conspiracy). 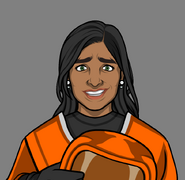 Trishna, as she appeared in To Eternity and Beyond (Case #56 of The Conspiracy). 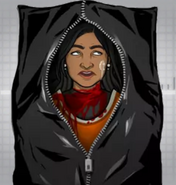 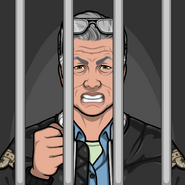 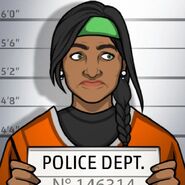 Retrieved from "https://criminalcasegame.fandom.com/wiki/Trishna_Joshi?oldid=491864"
Community content is available under CC-BY-SA unless otherwise noted.