April, May, and June Douglas, acting as recurring characters in Season 3 of Criminal Case, first appeared during the events of Bloodywood (Case #22 of World Edition), before going on to make a number of brief appearances over the course of the season. They also made an appearance as a single set of quasi-suspects in A Death Wish (Case #29 of World Edition).

After nearly dying in Bangalore, Lars read Om Padmasana's book and called his mother to take the triplets to South Asia so the whole family would become the guru's followers. Angela only found out about this as the triplets arrived in an airport in India. Jack and the player were able to convince Lars to no longer follow the guru. Afterwards, the whole family reunited and watched the charity cricket gala hosted by Arsha Raju.

During Guo Han's autopsy, April fell asleep on her mother's shoulder while Angela was cleaning her instruments. Angela then told the team to give her a minute. June can also be seen with her father.

Later, June went missing and she was spotted in the forest. Carmen and the player looked for her in the cliff's edge and eventually found her. It was revealed that June was only looking for pandas.

During the murder investigation, April wanted to go look at the pandas. She asked for her parents' and Jack's permission, which was refused.

After Jack and the player incarcerated Ellen Morowitz for murder, April went missing and May said that April had not got lost, and she just had run away to live with pandas. Angela and the player found her in the panda reserve with K-pop star SILVERee. He said that he found April wandering in the reserve and picked her to protect her from danger. Angela picked her up and reluctantly thanked the singer as she did not trust in him very much.

April did not want to go to the lab and said she wanted to become a panda carekeeper to live in the reserve forever. To calm her down, Angela and the player took her with Wang Fan to talk about pandas. The carekeeper gave her Jin Jin (a baby panda) to hug, much to the girl's amusement. After that, they safely returned to the Bureau's headquarters.

In the beginning of Gwak's murder investigation, it is known that Jack brought the triplets to the mall, but June came back to the headquarters because she was bored.

After arresting Kang Dong-yun for the murder, Angela was worried about her daughters because they went to the Oh! Crazy Kids! set. To calm her down, Carmen brought her to the Tapgol Park. Fortunately, the children were all together with Lars. Angela was threatened even since the Bureau discovered about SOMBRA's orphan recruitment. Carmen promised Angela that the Bureau would close the chapter of SOMBRA's child recruitment and keep the triplets safe at the same time.

Angela became worried since she thought the triplets were missing. She and the player went to a Tokyo street and found the triplets' favorite doll, Dollie Doll, torn up and smudged with a dark substance. They sent it to Lars for analysis. Lars said that the triplets were merely playing hide-and-seek in Elliot's lab. Furthermore, the doll was smudged with chocolate which contained DNA from all three girls, meaning that they tore up the doll.

When Angela talked to the girls, June said that she wanted to play with the doll but April was hogging her. April retaliated by saying that June was hogging all the chocolate which May stole from Elliot's office. May got mad and said that it was April's idea to steal the chocolate. Angela reprimanded the girls for behaving like savages but May said that they were simply not being weak, like Tsukada Chieko had taught them.

Midway through the investigation, June got hold of a crossbow and shot at an apple on April's head. Fortunately, Jonah was able to catch the arrow before it could potentially do any harm. June later said that Chieko taught them how to use a crossbow.

At the end of the investigation, Lars and Angela said that they were sending the triplets back to their grandmother in Australia so they could be safe. 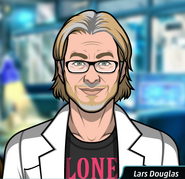 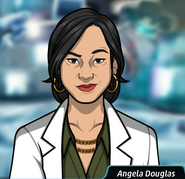