Criminal Case Wiki
Register
Don't have an account?
Sign In
Advertisement
in: Cases, Cases in The Conspiracy, University (The Conspiracy)

Gloria Hayes (All Chapters)
David Jones (Original Sin 5)
Trick or Treat is a case featured in Criminal Case as the forty-first case of The Conspiracy (Season 5) and the two-hundred seventy-second case overall. It takes place in the University district of Grimsborough.

Gloria and the player headed to Gregory Lynn's Halloween party at his house after Rita had informed them of a disturbance there. Outside of his house, they found Gregory's body slashed in half from shoulder to hip.

Mid-investigation, Mia Loukas reported that she saw someone dressed as a witch fleeing the scene to a costume shop, which turned out to be costume shop owner Lily Chen. Later Ramirez believed he had spoken to the victim using a spirit board. After the team collected enough evidence, they arrested Gregory's younger brother Adrian Lynn for the murder.

Upon admitting to the murder, Adrian said that he was in love with Polly O'Brien, his brother's girlfriend. After Polly had rejected his declarations of love for her, Adrian decided to take more drastic measures, luring Gregory outside the house after everyone took the party to his bedroom and slicing him in half with a scythe he found in the farm he lived in. He then slipped a spirit board planchette into Gregory's mouth to pin the murder on Lily. Judge Powell sentenced him to 37 years in prison with psychiatric counseling for the murder.

Post-trial, in exchange for a reduced prison sentence, Monica Pozie told Jones and the player that she had overheard Rozetta Pierre mentioning Gregory's Halloween party during her transfer from solitary confinement to the visiting room. Outside Gregory's house, the team found a visiting pass for Rozetta, which belonged to Azeeb Patel. Upon interrogation, Azeeb let slip that Rozetta had given him a card to share to his fellow Ad Astra members. After Azeeb told them that he had lost the card during the party, the team searched Gregory's bedroom and found a musical card, which (per Gabriel) was transmitting a Morse code message translating to "I trust you to take care of the Kevin Charles problem". The team then decided to dispatch an officer to Kevin's house.

Meanwhile, upon her ex-husband's request, Gloria and the player resolved Carter's costume crisis with help from Lily and Martine. After all the events, Chief Parker said she had dispatched officers to Kevin's workplace and house, as well as tasked Cathy to track down the Ad Astrans. A few hours later, Cathy told the team she had tracked Courtney Guerra to the scenic viewpoint. Before the team could go there however, Mia told them that Kevin was found murdered. 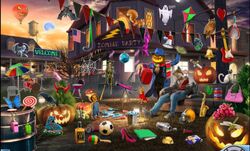 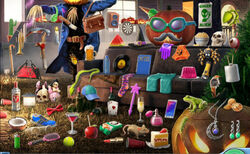 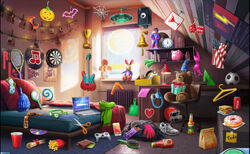 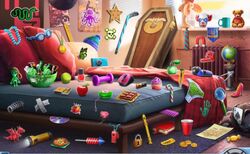 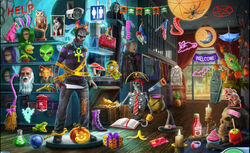 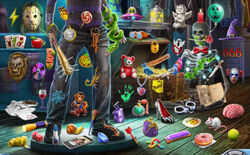