Triboulet's body was found slumped in a fountain in the Chambord gardens, stabbed in the throat, the heart and the stomach. Janis determined that the murder weapon was a sword, with Penelope elaborating that it was a rapier, a type of sword used for fencing. Since the killer was skilled with a rapier, Penelope concluded that the killer did fencing.

In the musketeer brackets, Zara and the player found a bloody rapier. Theo registered the rapier as the murder weapon as the blood belonged to the victim. Orlando revealed that the rapier had been specially handcrafted and that the handguard was designed for a left-handed person. This allowed Orlando to conclude that the killer was left-handed.

Triboulet performed for King Francis I. While he had initially found him funny, he had ordered Triboulet to be executed when his jokes hit too close to home. At another of his performances, Triboulet made Lady Anne Boleyn look like a fool when he spanked her in front of the king, prompting her to bite his leg and hit him with a juggling club. Triboulet's offensive humor led his brother, tax collector Charles Ferrial, to disown him, afraid that Triboulet would cause the king to lash out against the Ferrial family. Triboulet also stole a missive that had been entrusted to musketeer Alexandre Devereaux from the king, resulting in a physical altercation, and witnessed maid Gilia La Bonne steal a candlestick from the king.

The killer turned out to be Charles. 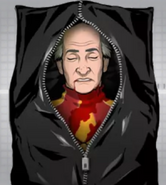 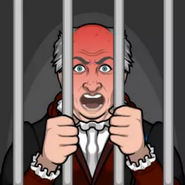 Charles Ferrial, Triboulet's brother and killer.
Add a photo to this gallery

Retrieved from "https://criminalcasegame.fandom.com/wiki/Triboulet?oldid=527776"
Community content is available under CC-BY-SA unless otherwise noted.