Dr. Trevor Neuman was a suspect in the murder investigations of teen soap sensation Jenny Galguera in Once Upon a Crime (Case #32 of Pacific Bay), movie producer Tyler Snakes in Dead Carpet (Case #38 of Pacific Bay), and entrepreneur David Rosenberg in Into the Wastes (Case #57 of Pacific Bay).

Trevor is a 51-year-old psychiatrist who primarily specializes in juvenile psychology to help juvenile stars in Ivywood cope with the pressure of stardom, just to name a few of his duties. He has black eyes, short gray hair and a dark stubble.

In his first appearance, Trevor dons a white striped shirt under a plaid vest, accompanied by a gray tie that sports a tieclip. For accessories, he wears a badge symbolizing the Utopians, smokes a pipe, dons black circular glasses and has a gold earring. It is known that Trevor uses anti-aging cream, has read The Glass Princess and is on anti-depressants.

As of his second appearance, Trevor dons a dark gray tuxedo—accompanied by a turquoise-colored bowtie and the same badge mentioned above—over the combination of a white-striped shirt and gray vest. He can still be seen smoking from his pipe. It is discovered that he has seen A Puff of Death, takes Nevrax and is a Capricorn.

In his third appearance, Trevor dons a lab coat with a chemical stain over a gray shirt with tie. It is revealed that he has radiation sickness, is a Meteor Systems employee and has a generator.

Trevor found himself in trouble after Frank and the player found an inkblot test which compelled its reader to admit that she was a princess—a feat which required Russell's intervention.

Frank wanted to know as to why an inkblot test was found inside Jenny's purse in the art studio. Russell confirmed that the inkblot test compelled Jenny to admit that she was a princess in her own right, sometimes forcing her to go far to believe that she was a natural-born princess. Russell also suggested the team talk to Trevor given his profession of helping juvenile celebrities cope with the pressure of stardom in Ivywood.

Trevor was aghast about Jenny's murder but Frank informed the psychiatrist that the late actress's life was unbalanced. Trevor told the team that Ivywood is not a place for children to be raised in given the competition and pressure that exists, and sometimes Jenny would suffer from a case of neurosis when depressed. All Trevor knew was that Jenny started her career before learning how to read, which does not seem to be normal for children of Ivywood.

Trevor would be questioned by Frank and the player a second time after the player caught him trying to retaliate with a brick at the Mr Sparkles toy store. Before the conversation, Trevor told the team that he hated the idea of the toy store using Jenny's death to market merchandise from Mr Sparkles' live film adaptation of The Glass Princess—a fairy tale by Gaston Dumas.

Trevor made it clear that he could not take the pain of children being denied normal lives in Ivywood, which made Frank realize he did not want his daughter to be on the same path Jenny was in her life. Trevor did not like the idea of having children utilized for "cheap entertainment" but moreso he views The Glass Princess as a message for youth and beauty—which he declared as being detrimental to juvenile females. In addition, Trevor did not like the marketing of age, youth, and beauty for means of entertainment at all, which is one of the reasons why he became a psychiatrist for juvenile stars of Ivywood.

Trevor was found innocent after an inferiority complex was found to be the driving reason for the murder of Jenny, but Frank needed his help in the hours following the murder case's closure.

Trevor required the team to find his thesis he lost at the Mr Sparkles toy store in exchange for his help. The player successfully managed to retrieve the thesis, but since Frank did not understand why the thesis book was so important to Trevor, the player opted to have Hannah analyze it as to why this was so.

Hannah told Frank and the player Trevor wrote the thesis book to inform the public about how harmful Ivywood's culture can be on juveniles—especially females. Hannah took time to display her disgust about Ivywood's "perfect image" the district imposes on women which in the long run causes extensive psychological damage to females cosmetically. The player thus proceeded to give Trevor his thesis back; Trevor stated he wanted to submit it to the Daily Dawn newspaper to make the public aware about how damaging Ivywood can be towards females—specifically girls younger than 21 years of age.

Trevor found himself in trouble after Amy and the player found a Nevrax package and, given the killer took that antidepressant, dusted it to reveal an ID number that, according to Hannah, belonged to him. After telling the player to not mix Nevrax with Gold Stag, he exclaimed that depression would be in the past that night, as the Utopian prophecy was to be fulfilled. Trevor explained that God would return to Earth with all the departed souls, filling the hearts of every man, woman, and child with happiness. However, for the prophecy to happen, the Utopian cult would need to gain 8,754,899 more followers by midnight.

Trevor was encountered again when Russell deduced the handwriting on the paper involving brainwashing experiments to be his. Trevor told the profiler that he was working endlessly on the project and that his breakthrough happened on his birthday, December 23. He had invented the brainwashing method, which was supposed to control the subjects' cognitive functions by stimulating their neocortex with projected images. Trevor shared his invention with the Utopians since they needed it to fulfill their prophecy. Russell demanded that the psychiatrist reverse the brainwashing, but Trevor refused to cooperate, thus forcing the player to place him under arrest.

Trevor found himself in another murder investigation in The Wastes after the team got a hold of his research. Amy was sure Trevor was in prison due to his work in the Utopians' brainwashing scheme, but according to Trevor he was bailed out by Meteor Systems who also employed him. He was at The Wastes to study research from an inventor named Albert Tesla. According to Trevor, Tesla worked in a lab that was in The Wastes, but vanished one day without a trace. Amy thought that Trevor knew nothing of the murder or of the escaped fugitives and Dr Neuman agreed to that.

Trevor was interrogated again after the team discovered that David was a test subject on Dr Neuman's experiments. He was testing a thought transmission machine, built by adapting one of Tesla's old inventions. Trevor said that David willingly became a subject, but Amy doubted that due to the message about his brain waves, Trevor replied saying that David said it was just his nerves. 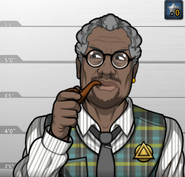 Trevor, as he appeared in Once Upon a Crime (Case #32 of Pacific Bay). 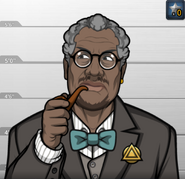 Trevor, as he appeared in Dead Carpet (Case #38 of Pacific Bay). 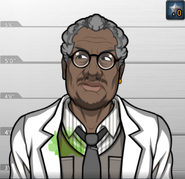 Trevor, as he appeared in Into the Wastes (Case #57 of Pacific Bay). 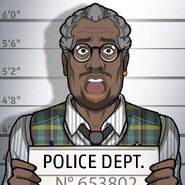 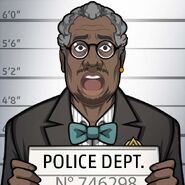 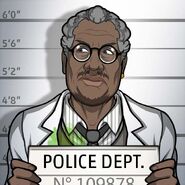 Retrieved from "https://criminalcasegame.fandom.com/wiki/Trevor_Neuman?oldid=430242"
Community content is available under CC-BY-SA unless otherwise noted.