Dr. Trevor Finn was the killer of reality TV star Jimmy Lewis in Shark Attack! (Case #1 of Pacific Bay) and a suspect in the murder investigation of businesswoman Karen Knight in The Sting of Death (Case #58 of Pacific Bay).

Trevor is a 56-year-old, gray-haired shark expert who served Ocean Shore's Sunny Beach. He wears a sky blue fisherman hat with a sea blue on the bottom half and a shark fin on the left side. He also wears a collared sea blue plaided shirt and sky blue undershirt. On his shirt, he has an ID card on his left side and a pen with a shark cover in his right pocket. Besides that, he is seen wearing a shell necklace, wears glasses, has wrinkles and a goatee.

In his first appearance, he sports a jellyfish sting on his neck and it is known that Trevor is in contact with parrots and eats hot dogs.

In his second appearance, his jellyfish sting has healed. It is discovered that he owns a cat.

When Amy was told by Chief Marquez to show the player the beaches of Ocean Shore, a shark attack doubling as a murder ringed up without warning and saw Trevor killing the shark. After the team investigated the shores and shipped the victim's body for autopsy, they opted to talk to Trevor. Trevor wanted to introduce himself but Amy countered that a man was murdered in the shore. Trevor enjoyed seeing the shark eat a human but had to kill the shark with the harpoon before the shark finished eating the victim.

The second time the team had to talk to Trevor was after a map was found at the boardwalk market and restored by forensic powder. Trevor thanked the team for finding his map and even described the shark's route but Amy told Trevor that was how the victim was murdered. Trevor even admitted that he had to take care of parrots to supplement his income and go on a hot dog diet since he did not see enough sharks nowadays.

It was later revealed that Trevor was responsible for Ice P's murder. Upon admitting to the crime, Trevor revealed that Ice P had driven the sharks out of the shoreline so that he could make his reality TV show safe to film, putting him out of a job. In court, Trevor told the Honorable Dante that when he saw Ice P drunk, Trevor secluded him, tied his hands with sticky tape and sliced his fingers off with a knife. He then threw both the fingers and Ice P into the water so that the scent of blood would lure a shark into attacking him. He was sentenced to life in jail.

Trevor became part of another murder investigation after Amy and the player found his hat in Meteor Systems' bunker. She was shocked to hear that Trevor was in The Wastes for whatever reason. Trevor was thankful that the player came, since Meteor Systems captured him and locked him up to take care of their sharks. He was not sure as to what Meteor Systems was planning, but was without a doubt sure that it was evil.

Amy and the player had to interrogate Trevor again after they found a USB stick belonging to him about the sharks he was monitoring. However according to Hannah, Karen hid encrypted information on it and wanted Trevor to warn the team about it. Trevor explained that if he gave them the flash drive, then they would kill him. Amy wondered who 'they' were, but Trevor was too scared to tell them who they were.

Trevor was found innocent for once after the team after they found it was Alden Greene that killed Karen Knight. 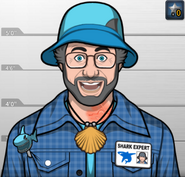 Trevor, as he appeared in Shark Attack! (Case #1 of Pacific Bay). 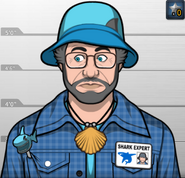 Trevor, as he appeared in The Sting of Death (Case #58 of Pacific Bay). 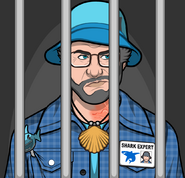 Trevor, sentenced to life in jail with no parole eligibility for the murder of Jimmy Lewis. 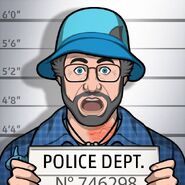 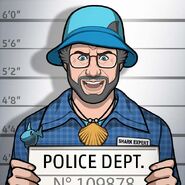 Retrieved from "https://criminalcasegame.fandom.com/wiki/Trevor_Finn?oldid=501366"
Community content is available under CC-BY-SA unless otherwise noted.