Travis Quaid was a suspect in the murder investigation of Unified Nations envoy Niilo Virtanen in Double Trouble (Case #52 of World Edition).

Travis is a 33-year-old talk radio host. He has long blonde hair and a goatee. He usually dons a teal shirt underneath a sepia jacket lined with a caribou hide and headphones. It is known that Travis reads Jack London.

Travis became a suspect after the player and Jonah found his poster with a picture of the victim in crosshairs. He said that the crosshairs were a metaphor, for the fact that he wanted the truth in his sights. When asked what sort of answers he needed about the victim, he said he wondered why the victim was really coming to Alaska, not buying the weapons facility inspection. He also wondered what the people behind his murder did not want them to know.

Travis was spoken to again after Ingrid reported that he broke into the crime scene. When Carmen asked why he had broken in, he said that he and his listeners wanted the truth. Specifically, he was going through Niilo's stuff to find proof that something bigger than the weapons inspection was going on. He firmly believed the victim was killed because someone wanted to make a point, that he was a pawn in someone else's game.

In the end, Travis was found to be innocent after the team incarcerated Joel Heller for Niilo's murder. 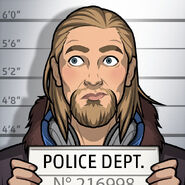 Retrieved from "https://criminalcasegame.fandom.com/wiki/Travis_Quaid?oldid=408936"
Community content is available under CC-BY-SA unless otherwise noted.