Tomas "Smokey" Marin was a suspect in the murder investigation of resistance member Dylan Mitvok in Resistance Is Fatal (Case #56 of Mysteries of the Past).

Tomas is a 70-year-old café owner. He has short gray hair, a mustache and a beard. He wears a beige apron over an orange-lined blue vest and a beige shirt with a black tie. It is known that Tomas bites his nails.

Tomas became a suspect after Isaac and the player learned that the victim was a frequent visitor to Tomas' café. When informed of the murder, he said that it was a shame and told them that he would always meet with a smart-looking man dressed in a suit, which Isaac inferred to be Bill Beatty.

Tomas was spoken to again about his relationship with the victim's family. He told them that he was best friends with the victim's father and saw Dylan grow up. However, when Dylan's father died, they lost touch. When Dylan showed up at his café, he expected him to be as happy as he was to see him but then realized that he had forgotten all about him, which angered him.

Tomas was found to be innocent after the team incarcerated Bill Beatty for Dylan's murder. 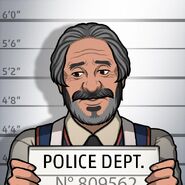 Retrieved from "https://criminalcasegame.fandom.com/wiki/Tomas_Marin?oldid=527717"
Community content is available under CC-BY-SA unless otherwise noted.