Tom is a 28-year-old masseur of a hammam in Inner City. He is bald, but has a ponytail at the end with a bun right at the top. He wears a white spa uniform with the logo of the hammam printed on the right side and a silver coin necklace around his neck. He holds a white towel with his left hand which is resting on his shoulders, and wears gold earrings. It is known that he smokes shisha pipe, uses bathing salts and reads the Daily Dawn.

Tom Zhang, a masseur at the Body & Beauty Hammam & Spa, was called into interrogation immediately after Frank and the player found Radovan's loyalty card inside a chest of spa accessories. The player pulled a mysterious number out of the loyalty card and sent it to Hannah, after which her analysis concluded it was an employee ID of Tom. Tom explained the scope of his job to the team upon the team's arrival at the hammam, but Frank wanted to know as to why he would treat Radovan in spite of not liking him. Tom told the team Radovan did not invite Tom to his daughter Manka's wedding in spite of Tom's exemplary service to Radovan massage after massage.

Tom was due for a second conversation after Russell caught a finding on the massage positions suggesting rough massage antics on the non-Chinese, which made no sense to the team at all. Back at Body & Beauty, Frank wondered why Tom wanted to use rough massages on the non-Chinese, to which Tom replied his unconditional allegiance to the Chinese community and eventually, join a Chinese gang. Tom went a level ahead by posting ads on the Daily Dawn newspaper (flagging him as someone who used to read the Daily Dawn, although no one replied to Tom's ads), suggesting the conversation solidified Tom's allegiance to the Chinese community.

After careful investigation, the team managed to point Tom as the one guilty of grand homicide. During his arrest, Tom told the team he lived his life in solitude but could not take it no more, so he resolved to do something to make a Chinese gang notice him, since he wanted to belong somewhere in the world. The task fell in proving his toughness to the Chinese community. Radovan frequented Tom and during his massage sessions, always bragged about his daughter Manka and felt he deserved to be invited to her wedding. Tom used Manka's wedding as an excuse to kill Radovan so that the Chinese gang could recognize him, but received no recognition from the Chinese gang. Frank sent Tom to trial as murdering people just for recognition was a bad idea.

In his speaking in court, Tom believed that him killing Radovan would unite the Chinese community against the Russian community with feelings that even Sue Xiong was secretly proud of him, although she could not admit she was the leader of a Chinese gang, of which Judge Dante thought was a ridiculous statement. Russell's psychological report suggested solitude was the driving reason that led Tom to grand homicide, but even with homicidal delusions the report declared Tom sane, which explained why Tom was given a 20-year jail sentence instead of treatment in an institution for the criminally insane. 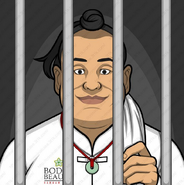 Tom, sentenced to 20 years in jail for the murder of Radovan Radich. 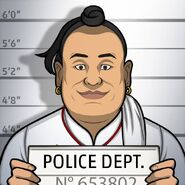 Retrieved from "https://criminalcasegame.fandom.com/wiki/Tom_Zhang?oldid=465229"
Community content is available under CC-BY-SA unless otherwise noted.